President Obama traveled to Wayne, Michigan Wednesday to take a “victory lap” in his bailout of the auto industry.

Now, whether Obama’s approach to the automakers’ bankruptcy bailout – designed as a gift to the United Autoworkers union – did any better for Detroit than the more neutral bankruptcy advocated by Republicans like Mitt Romney is anyone’s guess.

We do know it failed to force changes in the unions that could hurt automakers down the line, and that it had the moral hazard of telling other big companies in trouble that the government will step in and help them with their union problems.

The auto companies have now repaid taxpayers every dime and more of what my administration invested in you.

It really, at heart, is a lie.

First of all, you have to read the fine print. The clear impression Obama is seeking to convey is that the auto bailout was cost-free. But note he said “what my administration invested.” He is purposely, and deceptively, not including the money Bush handed the automakers. If you do that, there’s billions in losses.

So Obama seems clearly misleading, albeit maybe technically correct. But he’s not really even technically right. 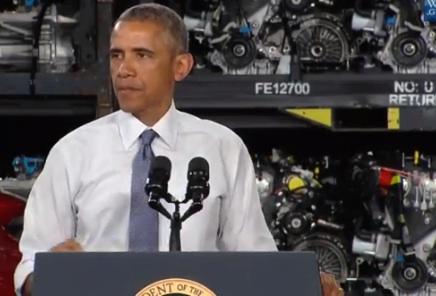 The money is obviously fungible. It’s all part of the same process. If Bush hadn’t handed the auto companies the cash he did, Obama would not have been able to achieve his “rescue.” Or, if the companies somehow survived without the Bush money until Obama was inaugurated, then Obama would have had to lend lend them the “Bush money” that was lost.

You may have heard that the real figure, including the Bush and Obama administrations, is a $9.26 billion loss. But that’s not quite right either.

As the Detroit News points out, that figure counts interest and dividends paid by automakers and their financial arms as offsetting the principal owed to the government. But the government shouldn’t get to count the interest, because it theoretically could have made that return on investment elsewhere. I mean, as the News points out, do you get to count your mortgage interest against your principal payments? Nut uh, they make you pay your interest separately, and much of it up front.

In fact, the government agrees. “Under government accounting rules, the U.S. Treasury actually lost $16.56 billion on paper on the auto bailout,” the News reports.

And that, folks, is the sum total of this latest Obama deception.