The White House today signaled it will attempt to use to its advantage the controversy over House Majority Whip Steve Scalise’s purported links to white supremacist David Duke, questioning the decision of Republicans to elevate Scalise to the whip position. 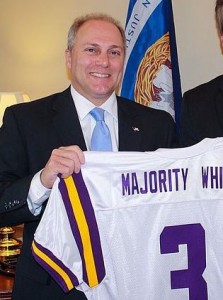 While averring that it “will be up to Republicans to decide” who they choose as leaders, White House Press Secretary Josh Earnest today left no doubt the White House had also decided. Against.

Earnest noted a report that Scalise once “described himself as ‘David Duke without the baggage.'” Earnest noted that Republicans are seeking to “broaden their appeal” and rhetorically questioned whether keeping Scalise as majority whip “will effectively reinforce that strategy.”

GOP leaders so far have stood by Scalise, who was reported to have addressed a white supremacist gathering in 2002. Scalise has apologized and maintained he was not aware of the group’s views.

As the controversy has developed, some who are supportive of Scalise have said his address to white supremacists may be less egregious than President Obama’s own repeated presence in the pews during the rantings of his former preacher and religious mentor, Jeremiah Wright.

69 Responses to White House Signals a Political Fight Over Scalise