The secret to Barack Obama’s success is an apparently infinite capacity for feeling good about himself without any evidence to support the conclusion.

That’s what propelled a one-term U.S. senator and former Illinois state legislator with an undistinguished record in either body to the presidency: an implacable sense of self-confidence drawn from – well I don’t know where it’s drawn from.

If you watched the press conference today, you saw it on display. He was relaxed, confident, completely dismissive of his opponents, and bragging shamelessly about his achievements. The media are already calling it “swagger.” MSNBC , as you can see below, was practically delirious with the news – that the person some even on the Left had come to see as a false Messiah had somehow resurrected himself. 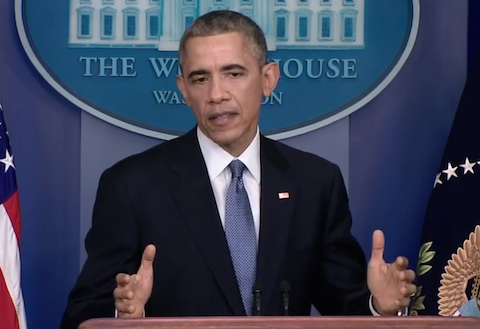 The president seems unaware that Democrats were destroyed in the last election; that the slaughter in Syria continues; that the economy has stirred to life only after five years of trying under his leadership; that the jobs being created ain’t that great, that incomes aren’t rising, and that more are simply out of the workforce than in 40 years; that the U.S. oil and gas boom occurred despite him, not because of him; that he blew Bush’s achievements in Iraq; that a whole new class of Islamists have been created for us to fight; that Iran is on the cusp of nuclear weapons; that people’s health insurance costs are on the rise and rationing is on the horizon. And on and on.

In short, that the world is a mess. But as I write this, he is confidently boarding a plane for two weeks of relaxation in Hawaii. He took a couple of executive actions of dubious wisdom and questionable legality – immigration and then Cuba – and clearly the narcotic of power has induced a state of euphoria.

The president and his staff seem to have taken flight, disencumbering themselves from reality. They no longer understand what’s happening, and don’t care what anyone – Democrat or Republican – thinks.

And those executive actions. They just make ya feel so good.

Get ready for two years of imperial rule.

← Obama: “Sony Made a Mistake”
Obama Press Conference: Ladies Only →

93 Responses to Obama Swaggers on Water