Once again, President Obama has claimed to speak on behalf of the American people. And once again, the l’état, c’est moi president is actually just speaking for himself.

Obama, as chronicled recently by Andrew Ferguson in the Weekly Standard, is a self-professed expert on “who we are as Americans” and loves to represent us all on any number of topics. Like all left-wingers, the president assumes his moral judgment and values are unassailable and must by default be shared by Americans, the election of the biggest Republican House majority in 50 years notwithstanding. 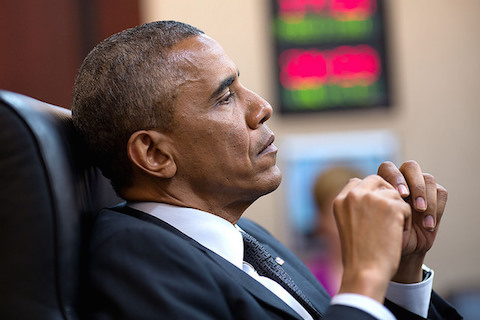 And so, Obama was certain we would share his view that extracting information out of terrorists like they were citrus in a lemon squeezer was not kosher. “Some of the actions that were taken were contrary to our values,” puffed the president upon the release last week of the Senate report on the extra-strenuous techniques – actually, torture – used during the Bush administration.

Well, when contacted by pollsters working for CBS, Americans decided to speak for themselves.

According to the just-released survey, which doubtless won’t get much play on . . . CBS . . . the number of Americans who think “water boarding and other aggressive interrogation tactics” are “sometimes justified” solidly exceeds those who think they are not justified, 49-36 percent.

Unlike Obama, who toasted the report’s release, Americans by 52-33 percent believe the report “poses a threat to the security of the U.S.” They also, being the straight-talking sort of people Americans are, agreed that the techniques were torture.

I understand that Obama thinks these tactics were inappropriate. It’s a legitimate point of view, even if I disagree with it. Obama has a right to his opinion. But he doesn’t have a right to ours.

73 Responses to Actually, Obama Doesn’t Know “Who We are as Americans”