The White House today pointedly declined to deny reports that it is considering sanctioning Israel over its continued construction of settlements on the West Bank, all but confirming that such sanctions are in fact very much on the table.

Asked by Ed Henry of Fox News today about the reports, White House Press Secretary Josh Earnest could have easily put the matter to rest. Instead, he garbled some gobbledygook about the United States being Israel’s stalwart ally and then wouldn’t answer the question.

Imagine this. Sanctioning a close ally – our only reliable ally in the Middle East – while the panoply of barbarians around the world go unpunished.

Are we going to sanction China’s leaders for brutalizing the people of Tibet, the Falun Gong, journalists, political opponents, or anyone else they don’t like? Of course not.

Are we going to sanction Saudi Arabia for its repression of women?

Are we going to sanction Venezuela for its beating and shooting of unarmed protestors?

I mean, the list of bad actors doing terrible things is endless. But we are going to put the screws to a U.S. ally already under siege.

I have to say, there’s a bit of vindictiveness in me. As Jew, I’ve had to listen so often as my co-religionists sing the praises of Obama, blast the Tea Party as evil dunces, and then proclaim their love of Israel.

I hate to say it, but unfortunately I believe it. If wasn’t a Jewish state, Jews would be denouncing Israel too.

When will my fellow Jews learn that in today’s world of moral relativism, when the sins of Arabs toward Israel and even their fellow Arabs are excused as the strivings of oppressed people, that the best friends Israel has are on the right and, indeed, in the Tea Party.

Republican presidents have been almost all solidly pro-Israel. Democrats, not so much. Obama, leftist one-worlder that he is, has been particularly hostile toward the Jewish state.

RICHARD NIXON SAVED ISRAEL with a massive airlift during the 1973 Yom Kippur War, for goodness sake. Yes, the hated Richard Nixon. Can any Jew imagine Obama doing that?

For future reference, here’s Hillary landing a kiss on Suha Arafat, wife of one of the world’s most prominent and successful post-Nazi Jew killers. 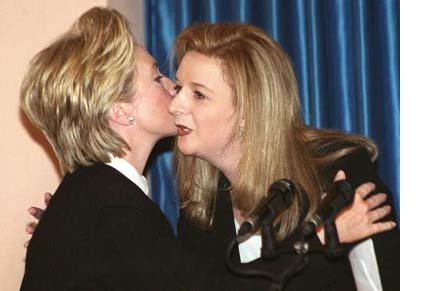 Soon, because of Obama, Iran will have a nuclear weapon, or the ability to make one quickly. The only solution may be an Israeli strike. Is there any way a man considering sanctions against Israel would support it waging a preemptive war to avoid atomic bombs landing on the beaches of Haifa?

I understand that most Jews are liberal and hold their beliefs sincerely. But please, when you speak of the sweetness of Obama, don’t say that Israel is high on your list of priorities.