Now we’re making sense. The White House has settled on the most obvious solution to its security problem: Make it more difficult for people to jump over the barrier between the public and the president.

On September 23, I wrote, as some of our fellow citizens were leaping over the fence and storming into the East Room, that the issue was not as complicated as people were making it:

You don’t always need high technology or a study from the RAND Corporation to solve a problem.

So amid all the agonizing about what to do about White House fence jumpers who might again make it into the building, I have a solution.

That’s right. Employing the time-tested theory, Good fences make good neighbors, I have determined that the solution to the president’s problem is to increase the size of the current fence, which stands at seven and a half feet.

I wasn’t being tongue-in-cheek. I thought it was a good idea. And today at the White House, I noticed this and snapped a photo. 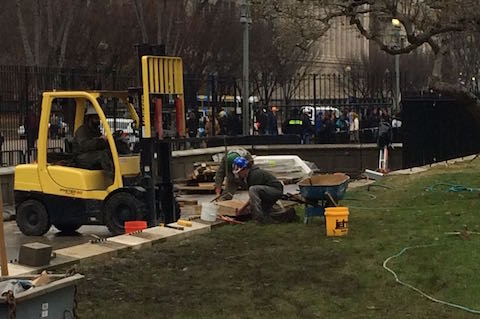 The original White House fence on Pennsylvania Avenue is to the right. You can see that a portion of it has been removed and the new fence, which looks two or three feet higher than the old one, is being placed another ten feet or so further out into the sidewalk. I assume the rest will be removed and backed up as work continues.

Notice they are constructing a little area between the grass and the new fence and the grass. Now, me, I’d put a moat there and populate it with man-eating alligators in the summer – believe me, alligators would love the Washington summer – and great white sharks in the winter. Or I’d cement rows of upturned serrated steak knives into the pavement. But that’s just me.

Probably what they’ll do is stock it with some prickly bushes designed to ensnare or slow an intruder, but which will probably do nothing against your average lunatic high on adrenaline or PCP.

But at least they’re taking a reasonable step. Maniacs demanding breakfast in the State Dining Room is not a welcome prospect, even if we call it “the people’s house.”

42 thoughts on “White House Decides to Build a Bigger Fence”