Longtime Obama friend Eric Whitaker is said by prosecutors to be stonewalling an investigation into a Chicago corruption case and is in danger of being labeled a “hostile witness,” according to the Chicago Sun-Times. 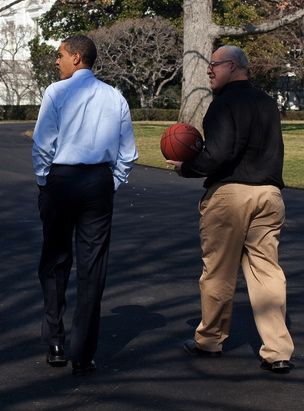 Whitaker served as director of the Illinois Department of Public Health from 2003 until 2007. He has not been charged with wrongdoing, but taxpayer money appears to have been finding its way into the wrong hands from within programs he oversaw there at an alarming rate.

Obama, who has hung out with Whitaker since the two were grad students at Harvard, worked his connections a decade ago to get Whitaker his job at the Department of Health, according to an earlier Sun-Times article. Obama provided his former associate Tony Rezko with “glowing recommendation” for Whitaker that was apparently passed on to Rod Blagojevich, then the Democratic governor of Illinois. Rezko, a Blagojevich contributor, was at the time helping the governor find people to run state agencies.

Both Rezko and Blagojevich were eventually convicted on corruption charges in other matters.

When Whitaker left the Department of Health, he landed at the University of Chicago Medical Center, where one of his colleagues was none other than Michelle Obama.

From the newest Sun-Times piece:

Dr. Eric E. Whitaker, one of President Barack Obama’s closest friends, has refused to answer federal prosecutors’ questions about whether he had a “sexual relationship” with a former aide who pleaded guilty to stealing $400,000 in taxpayers’ money in a scheme that began when Whitaker was her boss at the Illinois Department of Public Health, court records show.

Prosecutors announced the bribery and theft charges against Quinshaunta R. Golden, who’d been Whitaker’s chief of staff at the state agency, on Aug. 7, 2013. The following day, Whitaker told reporters he was “fully cooperating” in the federal investigation.

In fact, prosecutors say, Whitaker already had stopped cooperating by then, has refused to speak with investigators ever since and now faces the prospect of being called as a “hostile witness” in a related case against two other defendants charged with defrauding taxpayers, according to a court transcript obtained by the Chicago Sun-Times.

But, “following the execution of that agreement,” Whitaker “refused to answer certain questions about his relationship with Ms. Golden,” Bass told the judge.

According to the Sun-Times, yet another Whitaker aide at the time, Roxanne Jackson, has been implicated in a scheme to defraud taxpayers:

Whitaker’s actions surfaced during an Oct. 1 pretrial hearing in the case of Chicago businessman Leon Dingle Jr., who’s now on trial in Springfield for conspiracy, mail fraud and money-laundering. Dingle is accused of using his relationships with Golden; another former Whitaker aide at the Department of Public Health, Roxanne B. Jackson; and others to siphon off more than $3 million in taxpayers’ money for his own use, spending it on things including luxury cars and vacation homes.

A spokesman for Whitaker claims he has been cooperating:

Asked about the case, Marj Halperin, a spokeswoman for Whitaker, said Thursday: “Dr. Whitaker is not a party to the case, but he has been cooperative, and he’s been told he could potentially be called as a witness. Because of this potential of serving as a witness, it would be inappropriate to share any further details through the media.”

As the Sun-Times notes, Obama has not stepped back from Whitaker amid the probes of his former aides and the apparent stonewalling. Obama was hanging out with Whitaker as recently as August, when they golfed together on Martha’s Vineyard.