Official Who Called Netanyahu “Chickenshit” is Still in Hiding

Another aide to President Obama, who refused to speak on the record, said the official was cowering behind a semicircular hole at the base of a wall in the West Wing and being fed cheese.

“He thinks if he comes forward he will lose his job and possibly have his Twitter account suspended,” the aide said. “So for now he’s behind a wall and refusing to come out, and we’re supplying him with water, cheese, some toys to play with, and a steady supply of Xanax.”

Meanwhile, President Obama refused to try to find out who the official was who did so much to damage the already flailing U.S.-Israeli relationship. “The president is afraid if he figures it out, he might actually have to fire somebody, and the president hates personal confrontation.”

Another senior aide to Obama said the official’s charge that Netanyahu is “chickenshit” was not merely a random accusation, but one based on “sound science.”

“We’ve studied this long and hard, consulted with researchers at the Centers for Disease Control and the National Institutes for Health, and the scientific community is in agreement: Netanyahu is a chickenshit.

White House officials dismissed criticism of the science, saying Netanyahu’s performance as an Israeli Defense Forces commando staging raids along the Suez Canal and deep within Syrian territory during the 1973 Yom Kippur War should have no bearing on Netanyahu’s status as a chickenshit.

At the time, White House aides noted, Obama was himself forming his own elite unit in Hawaii, one that was eventually known as “The Choom Gang.”

UPDATE: After the publication of this article, the White House official who called Netanyahu a chickenshit reached out to White House Dossier for comment. Speaking on double super secret background, he said, “Eek.” Asked to elaborate, he said, “Eek. Eek.” 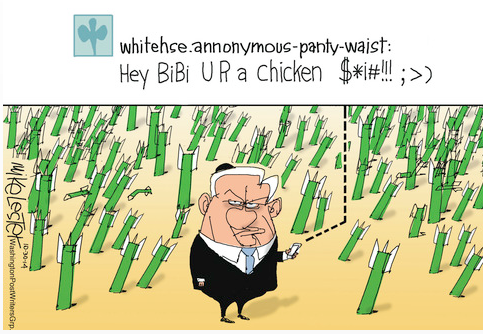