President Obama has chosen to make his policy points on Ebola by using the tactics he customarily employs during political campaigns – vilification and straw men – begging the question of whether he is using the Ebola crisis to buttress his own sorry standing with the American people and in the process help Democratic candidates who are being harmed by his tarnished image.

Granted, a White House so thoroughly politicized may not know how to talk in any tongue other than the language of confrontation.

But Obama’s approach to an issue on which he should be unifying the country stands out as particularly incongruous and can perhaps only be explained as a political effort. And the brutally sharp edge to his remarks likely is in part the handiwork of his Ebola coordinator, Ron Klain, who knows politics and not Ebola. 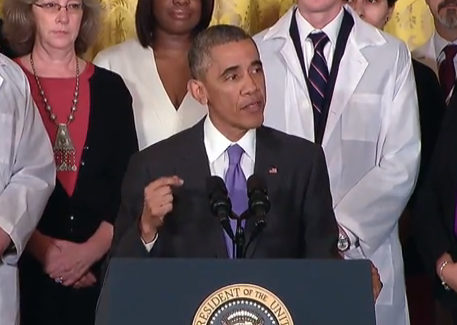 Make no mistake, I think Obama is correct to oppose quarantining health workers when they return from Africa. I agree with his argument that quarantines will damage our ability to send workers there and defeat the Ebola outbreak before it gets here.

But Americans who disagree with me, and with him, have legitimate arguments and rational bases for their concerns that steps short of a quarantine may be an insufficient guarantee that health workers won’t come home and spread the virus. People with opposing views should not be attacked.

But that’s what Obama did during remarks at the White House Wednesday, accusing his opponents of descending into crazed state of fearfulness that he suggested was un-American.

From his speech, delivered surrounded by health care workers who had returned from West Africa:

We don’t run and hide when there’s a problem. Because we don’t react to our fears, but instead, we respond with commonsense and skill and courage. That’s the best of our history — not fear, not hysteria, not misinformation. We react clearly and firmly, even with others are losing their heads. That’s part of the reason why we’re effective. That’s part of the reason why people look to us . . .

America has never been defined by fear. We are defined by courage and passion and hope and selflessness and sacrifice . . .

Who, exactly, is being hysterical? Chris Christie? Who is providing misinformation? Why is Obama putting people “on notice?” Why the anger? This is standard Obama acerbic political speech, not remarks about health care.

And some of these men and women have recently returned; others are heading there shortly. But all of them have signed up to leave their homes and their loved ones to head straight into the heart of the Ebola epidemic . . .  And we need to call them what they are, which is American heroes. They deserve our gratitude, and they deserve to be treated with dignity and with respect.

Really? Do people who disagree with Obama on Ebola policies not think those who treat Ebola patients are heroes? Only Obama does?

Note the self-promotion in these next comments, Obama’s implicit claim that he is a steady leader while others are losing their heads and “hiding under the covers.”

When I hear people talking about American leadership, and then are promoting policies that would avoid leadership and have us running in the opposite direction and hiding under the covers, it makes me a little frustrated . . .

And it’s . . . our ability to learn from mistakes that are made, and our ability to work through problems that are really complicated, and to see something through, and not lose our heads; to have grace under pressure and apply ourselves with slow, steady effort — the kind that change and progress requires.

I think the only people losing their heads are the victims of ISIS, the Islamist terrorist organization that metastasized in part due to a failure of leadership from Obama.

The president should promote his point of view. But politicizing it in the heat of campaign season, as he appears to be doing, is a disgrace.

95 thoughts on “Is Obama Politicizing Ebola?”