In case you need to get up to speed: New indications have emerged that the White House may have tried, as the 2012 campaign season progressed, to cover up the possible involvement of White House advance team member Jonathan Dach in the Colombia prostitution scandal involving the Secret Service.

Here’s the latest. According to Fox News:

The father of a White House advance team member connected to the Secret Service prostitution scandal was refunded a hefty Obama campaign donation, records show, around the same time additional details about that possible link were made public.

One day later, Leslie Dach had a meeting at the White House with a top presidential economic adviser, according to White House visitor logs. One day after that, the lead federal investigator into the Colombia prostitution scandal said for the first time that White House personnel may have been involved in the incident.

(Dach’s) attorney Richard Sauber told FoxNews.com in an email that the money was returned because Dach did not attend a fundraising event as planned — and “so the check (he thought) was either returned or not cashed.”

I don’t know. Why would Sauber have to attend an event to make a donation? Seems like the bar would be pretty high for returning a $20,000 check six weeks before Election Day at a time when the Obama campaign was hitting people up for $3 donations.

Another possible piece of evidence in this burgeoning scandal, the latest to rock the Obama administration. And as far as I can remember, it’s the Obama White House’s first sex scandal!

Here’s one of the ladies behind all the trouble: 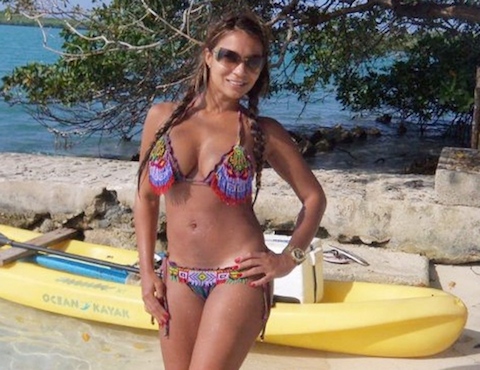 Of course, of course, there’s no excuse for any of this. But you can see how such a person could cause problems.

In the video below, Washington Post investigative reporter Carol Leonnig, who broke the news that the White House was aware in 2012 Dach may have been involved, explains why this scandal could be a big problem for the White House: It’s possible the coverup, which could include the return of funds to Dach’s daddy.

Leonnig calls “demonstrably false” the White House’s dismissive response to the evidence that Jonathan Dach returned to his hotel room in Colombia with a prostitute. And she suggests that the inspector general who led the probe of the scandal on behalf of the Homeland Security Department may have attempted in various ways to cover up findings that could have implicated a White House aide.