White House Press Secretary Jay Carney misled reporters in 2012 when he told them there were no specific allegations of wrongdoing against any White House staffer in the April 2012 Colombia prostitution scandal, a new report in the Washington Post suggests. 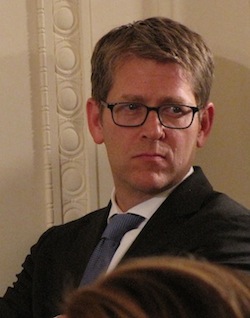 The growing recognition that the American public is routinely exposed to false and misleading statements from the White House, whether by the president or his aides, has recently prompted even mainstream journalists, among others, to question White House credibility.

According to the Post, the Secret Service told the White House specifically on Friday, April 20 that one of its staffers, a volunteer named Jonathan Dach, may have escorted a prostitute back to his hotel room in Colombia. Dach, whose father is a prominent Democratic donor, to this day denies the charge.

But White House Press Secretary Jay Carney falsely told reporters April 23, three days later, that there had not been any “specific allegations” against White House staffers:

There are no, to my knowledge, and have been no credible or specific allegations of misconduct by any member of the White House advance team or White House staff.

Carney repeatedly told reporters April 23 that an internal White House investigation of its staffers’ behavior in Colombia was not conducted in response to any allegation. That assertion also appears to be false, since the internal investigation was conducted the weekend of April 21-22, according to the Post, immediately after the Secret Service informed the White House of the allegations against Dach.

But Carney said on April 23:

Carney at another point in the April 23 briefing used more careful phrasing to describe potential allegations of inappropriate behavior by White House staff, saying there had been “no specific, credible allegations of misconduct.” This would be misleading but technically correct, since White House attorneys had supposedly come to the conclusion over the weekend that the charge against Dach was not “credible.”

But Carney later used the term quoted above, denying a “specific OR credible” charge. But the allegation was certainly specific, according to the Post:

The Secret Service first provided evidence pointing to Dach’s potential involvement in the scandal . . .  on April 20.

The information, which then-Secret Service Director Mark Sullivan gave to Ruemmler, was not detailed. It said Secret Service investigators had evidence indicating Dach registered a prostitute into his room at the Hilton Cartagena Hotel shortly after midnight on April 4. He also conveyed that Secret Service agents on the ground had information suggesting the same.

I guess it all depends on what the meaning of “or” is.

The lead investigator on a separate Department of Homeland Security inspector general probe into the matter said superiors urged him to alter and delay the report because of political considerations, according to the Post:

The lead investigator later told Senate staffers that he felt pressure from his superiors in the office of Charles K. Edwards, who was then the acting inspector general, to withhold evidence — and that, in the heat of an election year, decisions were being made with political considerations in mind.

“We were directed at the time . . . to delay the report of the investigation until after the 2012 election,” David Nieland, the lead investigator on the Colombia case for the DHS inspector general’s office, told Senate staffers, according to three people with knowledge of his statement.

Nieland later told Senate staffers that his superiors demanded that he remove from an official report references to the evidence pointing to the White House team member.

Nieland added that his superiors told him “to withhold and alter certain information in the report of investigation because it was potentially embarrassing to the administration.”

The White House denies it attempted to influence the investigation.

House Oversight Committee member Jason Chaffetz (R-Utah) has requested documents from the White House to determine how it reached its conclusion that the charges against Dach were not credible.