Right now, they are calling themselves the Islamic State, after previously using the terms ISIS or ISIL.

Now, I don’t really care what they want to be called. I stand with Winston Churchill on this, who was famous for mispronouncing words in the languages of his antagonists, including, of course, France. He’d probably call them “ISIS” and pronounce it “Asses.”

But I do care what our president calls them. Because by using the term ISIL, he is legitimizing their claim to a broader region than they currently occupy.

ISIL stands for Islamic State of Iraq and the Levant. It’s what The Bloodthirsty Lunatics – or TBL, another potential option – used to call themselves.

This is the Levant: 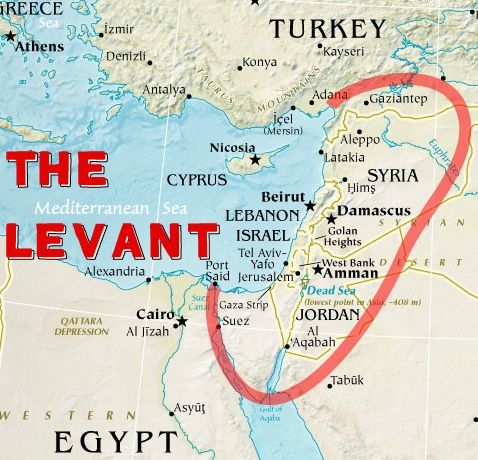 What do you notice about it? What’s there??

By saying “ISIL,” Obama may as well be saying “The Islamic State of Iraq, Syria, and Israel.”

Now, I know he’s not getting along with Netanyahu, but . . .

Obama just loves to respect other cultures by referring to them as they would themselves. Pahkeestahn, he loves to say, while the rest of us provincials just call the place Pakistan, as in “pack your suitcase.”

But this group deserves no respect. That they used to call themselves ISIL should be of no importance to our president.

Obama should immediately begin referring to these people either as ISIS or “Islamic State.” Since they want to be called Islamic State, I would opt for ISIS. In fact, I do opt, on this website, for ISIS.

That is what they are. Although the way Obama is prosecuting this war, ISIL may eventually become the truth.