The Democratic Party, in its quest for money and politically correct purity, has reached a new low.

A private citizen made a statement that some would find offensive. Democrats in Congress are trying to put that citizen out of business.

The citizen in question often makes controversial statements. He draws calumny from his opponents. And that is exactly whom the Framers intended to protect by writing the First Amendment.

According to the Democratic Congressional Campaign Committee, Rush Limbaugh said this:

How many of you guys, in your own experience with women, have learned that ‘no’ means ‘yes’ if you know how to spot it?

That resulted in a letter Sunday from Sandra Fluke, written on behalf of the DCCC:

As a previous target of Limbaugh’s sexist attacks, take it from me: we need to stand together and call Rush out. The DCCC has a petition to tell advertisers to stop funding this repulsive commentary. 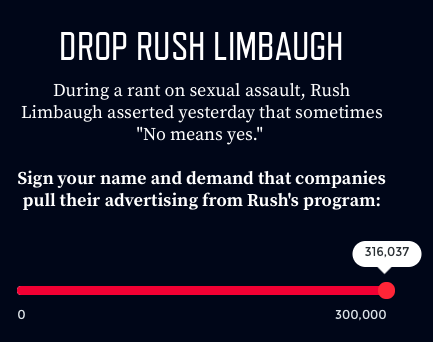 As you can see, as of this morning, the campaign had exceeded its goal of 300,000 signatures.

The DCCC is no ordinary political group. It is, by its own telling “the official campaign arm of the Democrats in the House of Representatives.” It’s chaired by a Congressman, Rep. Steve Israel of New York, and other members of Congress head up its key branches.

What I care about is that the DCCC, your government, is trying to put Rush out of business because of something he said.

The subversion of our country and its principles to the agenda of the Democratic Party and its demands for political correctness is far more of a danger than anything Rush Limbaugh can come up with.

Led by President Obama, who writes his own laws out of the Oval Office, the government is getting increasingly habituated to capricious actions that ignore the law and the Constitution because of the idea, which is everything our Founders fought against, that the views of individual rulers can be so important and so “obviously correct” that they can be unilaterally imposed on the nation.

This is the birthplace of tyranny. It is the rationale of the Bolsheviks. Here, in our country.

Whatever we once understood about civics is being forgotten. Be afraid for your children’s future.