The music he made isn’t bad.

Back in 1987, Bernie laid down a few tracks of unadulterated left-wing bile incorporated into actual folk songs. According to the website, Seven Days, Sanders recorded the “music” when he was mayor of Burlington, Vermont. 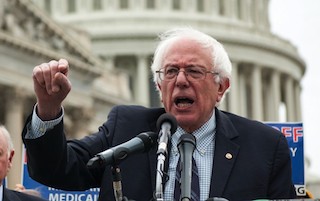 The songs consist of Bernie lecturing about one topic or another over instrumental music while actual singers wait for him to shut up so they can start the melody.

Here, Bernie introduces “We shall Overcome” with commentary about it being “wrong to deny” that “the world is an extremely depressing place” where people engage in “the futile striving for happiness by earning more and more money to buy more and more things.”

Remember, Ronald Reagan was president at the time. Personally, I wish I had as much of that futility as possible.

Here he is ruining forever the song, “This Land is Your Land, This Land is My Land.” I’ll have Bernie know that this land is MY land because I’m paying a mortgage on it.

And finally, the destruction of “Where Have all the Flowers gone,” in which he criticized the fighting of the Revolutionary War.

God, I hope he runs.

H/T to Pete Kasperowicz, who writes The Furnace blog over at The Blaze.

25 Responses to Bernie from the Village