One wonders just how stupid the Obama administration thinks people are.

In claiming he is only delaying his immigration amnesty announcement for the good of the people, President Obama is either lying to us or to himself. He could be lying to himself, I grant it, because for Obama to admit that he is doing something out of rank political considerations puts way too much stress on his self-image. 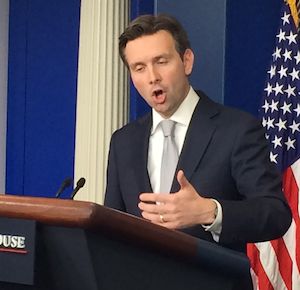 Either way, not since I took my kids to see “Frozen” have I come across such a fanciful story.

Here first, ripping several pages out of Animal Farm, is White House Press Secretary Josh Earnest trying to explain to an incredulous Major Garret of CBS News that President Obama is delaying his executive order because he . . .

1. Thinks the issue needs more splainin’ to the public so his fiat will be “sustainable” and . . .

2. It would be harmful to the issue to inject it into the arena during the campaign.

The bottom line underlying both, as I can understand it, is that Obama wants the action to be popular. Everyone of course knows the real reason is that he doesn’t want it to harm Senate Democrats up for reelection in right-leaning states.

And here are the original remarks by Obama, on Meet the Press Sunday, that Earnest was attempting to explain.

OBAMA: Not only do I want to make sure that the T’s are crossed and the I’s are dotted, but here’s the other thing, Chuck, and I’m being honest now, about the politics of it. This problem with unaccompanied children that we saw a couple weeks ago, where you had from Central America a surge of kids who are showing up at the border, got a lot of attention. And a lot of Americans started thinking, “We’ve got this immigration crisis on our hands.” And what I want to do is when I take executive action, I want to make sure that it’s sustainable. I want to make sure that–

CHUCK TODD: But the public’s not behind you.

CHUCK TODD: Are you concerned the public wouldn’t support what you did?

OBAMA: What I’m saying is that I’m going to act because it’s the right thing for the country. But it’s going to be more sustainable and more effective if the public understands what the facts are on immigration, what we’ve done on unaccompanied children, and why it’s necessary.

Well, you know there’s a problem when the president says, “I’m being honest now.” Meanwhile, if you checked out the Earnest video, you may have noted how uncertain he seems. As if he knows he’s not being honest now.

This is all so profoundly laughable.

Where was all the concern for making a policy “sustainable” when it came to passing Obamacare, the most sweeping, nation-changing legislation in half a century? The law wasn’t popular then and it’s not popular now. Where’s that old instinct, which Obama showed in 2010, to shoot first and take questions later?

And, one wonders, what’s the problem with injecting an issue into the campaign? Think about the mindset here. We do live in a democracy. Campaigns are held exactly for the purpose of discussing issues. Rather than a bad idea, is it not imperative to allow voters to weigh in on the president’s unilateral decision?

At the core of this reasoning is that there is something wrong with democracy. Obama’s policies are much too important to be put to voters.