President Obama’s chopper, which everyone thought was headed to Royal Air Force Station Fairford, in Gloucestershire, where Air Force One was waiting to take him home, suddenly touched down at Boscomb Down Airbase so that he could run on over to to see Stonehenge.

From the Pool report:

POTUS motorcaded for about 20 minutes in the countryside before reaching Stonehenge, in Wiltshire.

POTUS is doing a guided tour of the site under a grey sky with Heather Sebire, property curator. 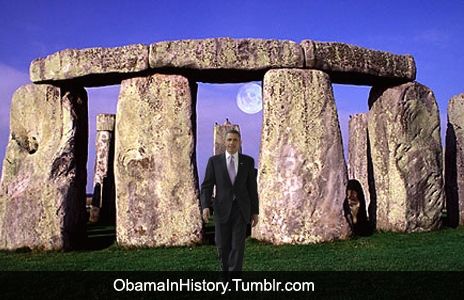 91 Responses to Surprise Visit to Stonehenge!