An Obama family vacation is an exercise in rituals – box checking if you want to be mean about it – and one of the sacred rites on the Martha’s Vineyard vacation, along with a trip to the beach and a look through the bookstore, is The Bike Ride.

This has not always worked out well for the president, as he looks not quite as natural as the lady Obamas on The Bike Ride. Actually, he’s been accused of looking like he might be a lady himself. 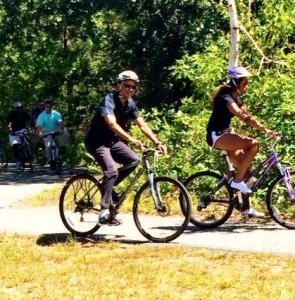 Not bad at all! Nice, hip-dad look.

The White House says that Obama, the First Lady and Malia are biking on the Manuel F. Correllus State Forest bike path outside West Tisbury. Not sure where Sasha is. Not even sure if she’s with them at all.

The paved bike path cuts through a heavily wooded area, offering a shady ride on this picture-perfect day.

Obama, the First Lady and Malia passed by, pedaling at a leisurely pace. “Hey guys, nice day, huh?” Obama said to the pool.

All three were decked out in athletic wear, with Michelle Obama in gray spandex capri pants and a short-sleeved top. Malia wore running shorts and a black T-shirt.

The pool saw the president and family for only seconds as they continued to make their way down the path.

After an hour or so, it was enough biking, and Obama headed directly for the golf course. He’s back at the Farm Neck Golf Club.

With him are Glenn Hutchins, a Democratic fat cat donor who owns part of the Boston Celtics, Robert Wolf, another Democratic fat cat who was invited back after golfing with Obama Monday, and Cy Walker, Obama’s new BFF who is playing golf with the president constantly on the Vineyard. Walker is Valerie Jarrett’s cousin.

It is Obama’s fifth time playing in seven days on vacation, his 32nd outing of the year, and the 189th of his presidency.