On Vacation, Obama Indulges in the Sweet Life

President Obama Tuesday dined, as he has on previous Martha’s Vineyard sojourns, at the Sweet Life Cafe, another Obama destination off limits to the 99 percent.

You know your wallet is in for a good cleansing when the menu doesn’t list prices. Always a bad sign. Monsieur, let’s not discuss anything as tacky as the price. It’s only money. 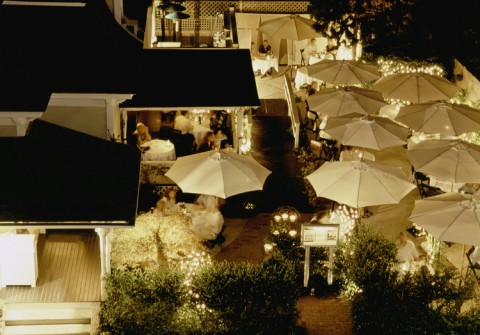 There it is. Ahh, the Sweet Life.

Here’s what the president had to choose from.

I don’t know about you, but I only take my mushrooms miatake or porcini and my parsley emulsified. And if I can’t get my lamb three ways, then I’m not having lamb at all.

Okay, he’s a wealthy guy – who really crashed into the dough once his books started selling as his political career took off, but I digress – and he has every right to go to such place. And would I refuse an invitation to the Sweet Life, assuming I wasn’t picking up the tab? No! But funny that he didn’t allow photographers along like he does when he hits up some burger joint on the road.

But he did bring along National Security Advisor Susan Rice, Attorney General Eric Holder, and former U.S. Trade Representative Ron Kirk and their spouses, who dined en masse with the Obamas.

95 thoughts on “On Vacation, Obama Indulges in the Sweet Life”

11:30 am || Meets with Asian American, Native Hawaiian, and Pacific Islander to discuss his agenda and anti-Asia bias
3:00 pm || Delivers remakrs on clean vehicles
4:30 pm || Signs H.R. 3325, “An Act to award four congressional gold medals to the United States Capitol Police and those who protected the U.S. Capitol on January 6, 2021,”