There seems to be an effort afoot at the White House to demonstrate to the world that President Obama, who has now been getting flack even from the mainstream press for being disengaged – me and you have been wondering where he’s been for some time – in fact DOES SHOW UP FOR WORK.

In the strangest “pool spray” I’ve ever seen, the pool reporters were escorted to the windows of the Oval Office to bear witness to the fact that the president is on the phone.

At 11:18 am, the pool was brought to the windows outside the Oval Office for a photo spray. It lasted 10 seconds.

We spotted the president sitting at his desk, talking on the phone – his left hand to his left ear. He briefly fiddled with his pen. Several aides were sitting on the couches. The pool has requested a list but the pool did spot Tony Blinken, deputy national security adviser.

“The President speaks with His Majesty King Abdullah II of the Hashemite Kingdom of Jordan. A formal readout will be provided later today.”

We were obviously not able to ask any questions of the president.

We have a lunch lid.

NEWSFLASH: We spotted the president sitting at his desk, talking on the phone – his left hand to his left ear. He briefly fiddled with his pen.

Here are your brave White House journalists gathering the news. 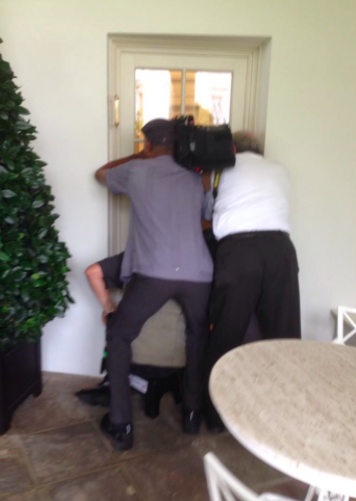 Not exactly Gaza duty, is it?

Et voilà, the result, last night on the homepage of the New York Times website: 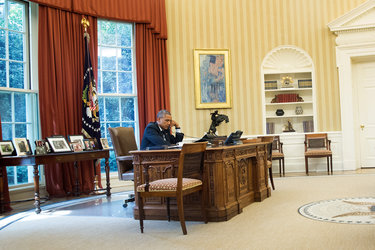 There he is, not a golf club in sight. Even wearing his jacket in the Oval, which I don’t think he normally does.

And while I previously thought Obama was going to return from Martha’s Vineyard for a couple of days of “meetings” – before returning to his vacation – because something serious was going on, I’m now thinking nothing serious is going on at all!

During Thursday’s White House briefing, CBS correspondent Mark Knoller raised the possibility with White House Press Secretary Josh Earnest that that Obama’s White House stop might have something to do with skepticism about the wisdom of taking a two week vacation while the world is falling apart:

KNOLLER:  Josh, you said you couldn’t say who President Obama would be meeting with when he returns during the middle of his Martha’s Vineyard trip.  Can you say what the subjects of those meetings might be?

MR. EARNEST:  I can’t at this point, but you can check back next week and we’ll see if we can provide you some additional insight into those meetings.

KNOLLER:  Does he just want to meet with somebody?  (Laughter.)

KNOLLER:  Does it address or reflect a sensitivity about the optics of a two-week vacation?

MR. EARNEST:  It does not.  There have been questions raised by some of our critics about the optics of two- and three-day travel.

But as Knoller put, he will be meeting with somebody.