You may not have read much of the rhetoric Vladimir Lenin spewed as he launched communism in Russia.

It’s worth taking a look at.

As you may know, he first targeted businesses and his political opponents.

Businesses, some of which were desperately trying to locate overseas to escape his confiscatory tax rates, were labeled “corporate deserters.” Lenin declared they were taking advantage of a Tsarist-era “unpatriotic tax loophole” and were “fleeing the country to get out of paying taxes,” locating their headquarters overseas even as they still did most of their business in Russia.

Their activities were “a threat” to us all, he charged, and they needed to be roped in.

That they were in fact obeying the law mattered little to Lenin, who of course specialized in altering laws to suit his purposes, and who viewed his own morality as taking precedent over legal inconveniences.

He went on, of course, to suggest his opponents were traitors of a sort, suggesting those who disagreed with him lacked “patriotism.” The Gulag wasn’t far behind.

Oh wait, those comments weren’t Lenin. That was all Obama. Thursday. 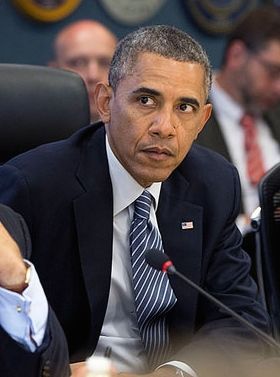 President Obama excused himself from fundraising for a moment Thursday in Los Angeles to engage in an even less appealing pastime of his: totalitarian-style rhetoric.

You think I’m exaggerating? Carried away with some kind of hatred of the president?

Well consider these quotes from Obama’s speech, blandly labeled by the White House, “remarks by the president on the economy.”

Obama first condemned the practice by some corporations of merging with foreign companies in order to avoid paying U.S. corporate tax rates, which are far higher than those in Europe.

The practice is perfectly legal and would end if Obama ever got serious about tax reform. But instead, he’s taking his vilification of corporate America on the road and using it as a campaign theme this year.

OBAMA: But there’s another trend that is a threat to us.  Even as corporate profits are higher than ever, there’s a small but growing group of big corporations that are fleeing the country to get out of paying taxes.

OBAMA:  Well, hold on a second.  I want you — I say fleeing the country, but they’re not actually doing that.  They’re not actually going anywhere.  They’re keeping most of their business here.  They’re keeping usually their headquarters here in the U.S.  They don’t want to give up the best universities and the best military, and all the advantages of operating in the United States.  They just don’t want to pay for it.

So they’re technically renouncing their U.S. citizenship.  They’re declaring they’re based someplace else even though most of their operations are here.  Some people are calling these companies “corporate deserters.”

And it’s only a few big corporations so far.  The vast majority of American businesses play by the rules. But these companies are cherry-picking the rules. . .

Now, the problem is this loophole they’re using in our tax laws is actually legal.  It’s so simple and so lucrative, one corporate attorney said it’s almost like “the Holy Grail” of tax avoidance schemes.  My attitude is I don’t care if it’s legal — it’s wrong.  (Applause.)  . . .

You shouldn’t get to call yourself an American company only when you want a handout from American taxpayers.  (Applause.)

That’s why, in my budget earlier this year, I proposed closing this unpatriotic tax loophole for good .  .  .

Even worse is Obama’s new theme of “economic patriotism,” which lacks definition beyond support for Obama’s policies. Oppose Obama, and you’re not a patriot.

Economic patriotism says it’s a good thing when we close wasteful tax loopholes and invest in education, and invest in job training that helps the economy for everybody.  Instead of tax breaks for millionaires, let’s give tax breaks to families to help on child care or college.  (Applause.)  Let’s stop rewarding companies that ship jobs overseas; give tax breaks to companies that are bringing jobs back to the United States.  (Applause.)

Let’s put America back to work rebuilding roads and bridges and airports.  Let’s make sure the next generation of good manufacturing is happening right here in Los Angeles, and in Wisconsin, and in Pittsburgh, Pennsylvania.

This is very, very dangerous stuff. Obama is accusing businesses of being “deserters” – a heavily loaded term – and his opponents of being unpatriotic.

I’ve never heard a president talk like this, have you? If Richard Nixon had said these things, historians would be framing it as consistent with his megalomania and abuse of office.

Placed in the context of Obama’s increasing resort to executive power, his new rhetoric is chilling.

No, I don’t think Obama is going to walk in Lenin’s footsteps and decree some kind of Socialist paradise.

But someone who is so angry at his opponents and so willing to stir up the masses with such pernicious rhetoric needs to be watched closely. He has only two and a half years left, and there’s much he’d like to do to finish “fundamentally transforming” America, as he promised.

Throw in some unexpected, serious crisis, and there’s no telling what our leader might do to “save” the nation from whatever it is he determines is “a threat to us.”

62 thoughts on “The Obama Manifesto”