You know, if President Obama didn’t seem so uninterested in his job and so eager to indulge his inner laziness, this might really concern me.

But just in case, polish your goose-steppin’ boots! 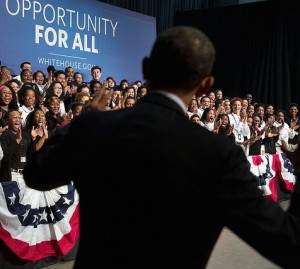 For the second time in three days today, Obama used the term “economic patriotism,” by which he apparently means support for Our Leader’s economic policies.

Obscured by the focus on his “so sue me” comment during his remarks in Washington Tuesday was something rather darker offered up in the same speech. It was the clear suggestion that Republicans were failing in their duty as Americans to put politics aside and get in line behind Obama, who of course is above politics.

We could be doing so much more if Republicans in Congress were less interested in stacking the deck in favor of those at the top or trying to score political points, or purposely trying to gridlock Washington, and just tried to get some things done to grow the economy for everybody.  We could do so much more if we just rallied around an economic patriotism, a sense that our job is to get things done as one nation and as one people.

Economic patriotism would say that instead of protecting corporations that are shipping jobs overseas, let’s make sure they’re paying their fair share of taxes, let’s reward American workers and businesses that hire them.  Let’s put people to work rebuilding America.  Let’s invest in manufacturing, so the next generation of good manufacturing jobs are right here, made in the USA.  (Applause.)  That would be something to celebrate on the 4th of July.  (Applause.)

Economic patriotism says that instead of stacking the deck in the favor of folks just at the top, let’s harness the talents and ingenuity of every American and give every child access to quality education, and make sure that if your job was stamped obsolete or shipped overseas, you’re going to get retrained for an even better job.  (Applause.)

Here’s some video. The economic patriotism business starts at about 2:00.

The phrase was back today, in remarks Obama made during an unscheduled stop in Washington to trumpet the Labor Department’s positive news on jobs. He linked the term “economic patriotism,” which has a mild ring of fascism to it, to Independence Day.

While such a thing was presumably common in pre-democratic Europe and today throughout the Third World, I’m really not used to hearing American presidents associate their policy choices with patriotism.

The suggestion that one’s policies are patriotic contains the clear implication that others’ are not. It’s repugnant when people say such things in private conversation. For a president to make such a presumption is startling, and bears watching.

Obama is already pitting Americans against each other by class, with his caricatures of conservative ideology. Now if you oppose him, you are not just a shill for the rich, you are un-American.

What does is entitle you to do if your opponents are not just wrong, but unpatriotic? We’ll find out.