The Blaze took a close look at Sunday’s Meet the Press interview with Valerie Jarrett, for which NBC was granted exclusive access to the West Wing so they could follow her around, and noticed this in her office: 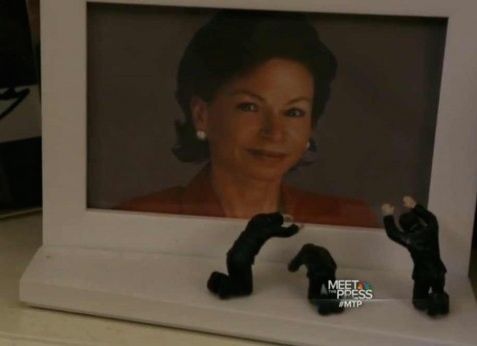 Okay, I get it’s a joke. Valerie tweeted that it was a “gag gift.” But who has a photo with people bowing to themselves in their office, even for fun?

Who even has a photo of themselves in their office??

Like you need to look at yourself, but you have no time to run to the mirror. And so there’s the photo.

Anyway, in case you’re interested, here’s the video from Meet the Press. It gives you a little behind the scenes stuff. Note that while Jarrett gets to work at 7:15 am, Obama is nowhere to be seen during the morning.

23 Responses to Bow to Val!