Obama’s Inspired Choice for the VA

President Obama’s nomination of former Proctor & Gamble CEO Bob McDonald to be Secretary of Veterans Affairs is a deft move that offers hope for our nation’s veterans, too many of whom who have suffered tragically and needlessly at the hands of the Veterans Health Administration.

What the president is trying to do, incredibly for him, is bring a serious dose of the private sector to the public and hope it can prod the VHA in the direction of greater efficiency and efficacy.

The VHA’s dysfunction is probably so great that the only way to truly serve our veterans’s health needs is to privatize their care through some kind of voucher system. But obviously, with this administration, that’s not going to happen. So McDonalds’ appointment is the best that can be expected.

Mr. McDonald was principally chosen because he has the kind of record as a solid manager that will be required of the next Secretary of the Veterans Affairs Department to put in place the reforms that are needed to live up to our covenant that we have made, that our nation has made, with our men and women in uniform.

In choosing for our veterans, Obama opted to ignore that McDonald has contributed to Republicans, including Sen. Rob Portman of Ohio, Speaker John Boehner, and even, yes, Mitt Romney.

The chief complaints against McDonald include that though himself a former Army captain, he’s not up to speed with Iraq and Afghanistan’s veterans. Well, he’ll get up to speed. The essence of a great executive is that their skills are not only abundant but transferable – that they can be working for Mastercard one day and Coca Cola the next. 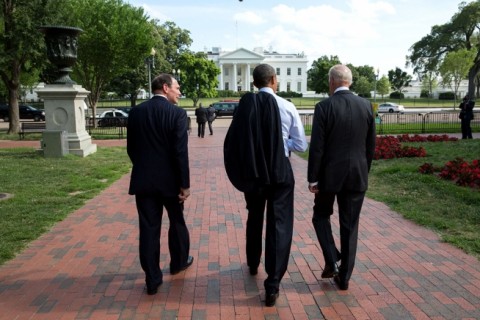 McDonald, Obama and Biden walk to the White House Monday

McDonald was also ultimately forced out at P&G, but only after climbing the ladder to the top and staying there for four years. The complaints about him seem to be more that he failed to come up with the next great shampoo than that he wasn’t a good manager. And management and restructuring will be at the core of McDonald’s mission at the VA.

He’s a man who understands how to maintain a grasp on a sprawling, unwieldy organization. True, he’ll be bumping up against Catch-22’s daily in government that he could never have imagined in the private sector. But he’s better equipped to deal with them than folks who have been in government too long and adapted to its ways.

He may be the best hope for now our veterans have of getting decent health care, and Obama should be applauded for choosing him

14 thoughts on “Obama’s Inspired Choice for the VA”