Hillary Clinton’s most recent gaffe on her ill-fated book tour begs the question: Is she fully revered from banging her head?

Has she banged it again since? 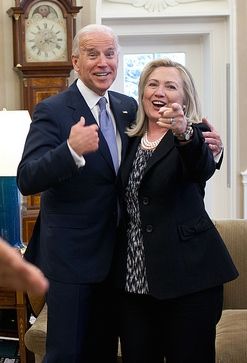 Oh, I guess I don’t really think her December 2012 head injury is affecting her performance as she tries to promote her leaden account of her years as Secretary of State. Although anything’s possible. But I’m at a loss to explain how someone so intelligent, who has been around politics her entire adult life, could be operating so ham-handedly.

Rather than cementing her status as the front runner by reintroducing her to the public as a warm, cuddly Hillary, the book tour has eroded the sense of inevitability she strutted around with just a few weeks ago.

The latest bizarre episode on her itinerary of woes is a doubling down of her claim she left the White House is financial tatters with an assertion that she is not “truly well off.” From an interview with the Guardian newspaper:

America’s glaring income inequality is certain to be a central bone of contention in the 2016 presidential election. But with her huge personal wealth, how could Clinton possibly hope to be credible on this issue when people see her as part of the problem, not its solution?

“But they don’t see me as part of the problem,” she protests, “because we pay ordinary income tax, unlike a lot of people who are truly well off, not to name names; and we’ve done it through dint of hard work,” she says, letting off another burst of laughter.

Really, I guess she has lived in gilded towers of one kind or another for so long that she doesn’t understand how she is perceived. I gather she has been unwilling, in her own mind, to abandon her 1970s self-image as a middle class gal trying to make some cash and do some good within the oppressive capitalist system.

Don’t worry Hillary. There may be hard times ahead, trying figure out how to make it work with that $100 million-plus you and your husband have grabbed off the personal-appearance money tree the last few years.

But girl, you’re gonna make it after all.

21 Responses to Exactly How Hard Did Hillary Bump Her Head?