If you are a partisan Obama supporter, then Carney did a pretty good job. He made few mistakes, aggressively and eloquently promoted the president’s agenda, and largely kept a lid on serious investigative reporting with respect to the Obama administration.

The extent of his contribution to this latter achievement is unclear. The press corps is naturally in Obama’s pocket, and with journalism stretched thin and people who might have been doing investigative reports forced to throw any junk they can find onto websites and otherwise multimedia themselves to exhaustion, the press itself holds probably the lion’s share of the fault.

Carney’s contribution was to run an operation that routinely bullied reporters with the angriest, foulest language you can imagine in an effort to squash honest journalism that might be even mildly critical of the president. Reporters like to pretend this tactic doesn’t affect them, but I think it works. For many of them, it’s easier not to deal with the nastiness.

Which brings us to Carney’s failures – surprising and disappointing in someone who devoted most of his professional career to supposedly serving the cause of free speech.

By attacking reporters, Carney acted to suppress speech. He did this in service of what he believes is a greater cause – Obama and Obama’s leftist ideology, which Carney sincerely subscribes to.

The evil twin of Carney’s attacks on free inquiry was the failure under his stewardship of the administration to provide the public with the openness Obama had promised. Rather, there was less “transparency” under this White House than any other. Much of this was not Carney’s doing, though he at the very least either abetted or acquiesced in it. 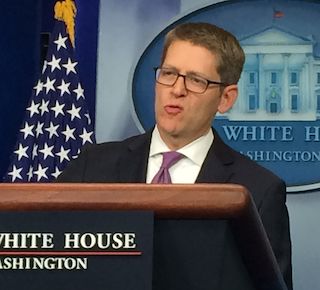 Under this White House, Freedom of Information requests were stymied, whistle blowers and leakers were assailed like perhaps never before, and journalists were targeted as part of criminal investigations.

Information that should have been revealed – for example, data on Obamacare registrations – was withheld from the public. Presidential press conferences were far too rare. The White House used its own photographer to “cover” the president. And worst of all, the American public was repeatedly and egregiously lied to.

Carney’s own specialty was to cling unfailingly to his limited talking points during briefings while sounding like he was doling out much more information than he was.

But unless he is the most cynical man in Washington – wouldn’t rule it out – I have to say that I am impressed that Carney is at least a true believer in what he is doing. If he was fooling us, he wouldn’t have spent so long as press secretary. It’s a grinding job and the temptation to leave and make a lot of money – not to mention see your children – is great.

Reporters tend to be, even more than they are liberals, skeptics and even cynics, and Carney obviously during his time as reporter hid a passion for liberalism. I like it when people stand for something, even if they stand for something I disagree with. So I’ll give him that.

Relations with the press are not good, though, and Obama at this point, while not subject to the probing he deserves, is getting coverage that is worse than it might be. Incoming White House Press Secretary Josh Earnest is temperamentally different than Carney and has always had good relations with many reporters. We’ll see if NutraSweet works better than Saccharin.

Carney arrived at the Colbert Report Thursday night to begin promoting Jay Carney, The Former Press Secretary, Inc. I think he could have waited until after he was off the taxpayers dime to do that, but, whatever.