President Obama today indicated he is prepared to order airstrikes to combat advancing Islamist rebels in Iraq, saying he may authorize “targeted and precise military action” depending on the situation on the ground. 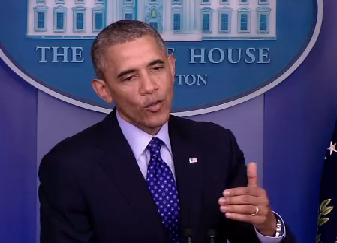 Obama, who appeared in the briefing room today at the White House following a meeting with his national security team, did not say when strikes might occur. He promised that he would “consult with members of Congress” with respect to the strikes, but pointedly did not say he would seek prior approval before taking any actions.

Obama also said he would send up to 300 “military advisors” to assist the Iraqi military.

But he ruled out the use of combat troops in the country.

“American forces will not be returning to combat in Iraq, but we will help Iraqis as they take the fight to terrorists,” he said.

Obama denied the dispatch of military advisors would lead to a return to a U.S. combat role.

“We always have to guard against mission creep” he said, repeating that American troops won’t fight in Iraq again.

“We do not have the ability to simply solve this problem by sending in tens of thousand of troops and committing the type of blood and treasure that have already been expended in Iraq,” he said. “This is something that ‘s going to have to be solved by the Iraqis.”

Obama added, though that it is in U.S. national interests for Iraq not to be in a state of civil war and for the country not to become a safe haven for terrorists.

He dismissed a question from a reporter about whether he regretted not leaving a residual U.S. force in Iraq.

Obama didn’t rule out Iran having a positive impact on Iraq.

“Our view is that Iran can play a constructive role” if it support unity between ethnic groups in Iraq,” Obama said. But “if Iran is coming in solely as an armed force on behalf of the Shia . . . then that probably worsens the situation.”

He offered the Mullahs some advice, saying that supporting sectarian battles around the region would be bad for Iran and its economy.

He said that while “old habits die hard,” there was hope for Iran to change. “We’ll se if they can take a more promising path over the next several days,” he said.

The president said the United States would ramp up its intelligence gathering capabilities and efforts and coordinate planning and intel with the Iraqis. Secretary of State John Kerry will travel to Europe to begin a coordinated diplomatic effort to address the Iraq crisis.

“The fate of Iraq hangs in the balance,” Obama acknowledged, saying he hoped such a situation would spur Iraqis to solve their problem. U.S. troops cannot do it for them, he said.

Obama said it would be a priority for him to keep Americans in Iraq safe. He added that he will develop strategies to deal in the long term with ISIS, the Jihadist group rampaging through Iraq.

96 Responses to Obama Prepared to Order Airstrikes in Iraq