How Obama Instituted Common Core on the Sly 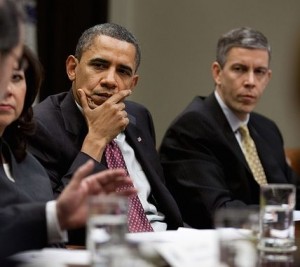 It seems that way, right? Well, that’s because it is that way. By design.

Through a combination of lavish spending by Microsoft’s Bill Gates and swift movement by the Obama administration, the Common Core standards that have now become so controversial were instituted pretty much before anyone knew what was happening. And of course – this is the Obama administration we’re talking about – without the cumbersome, annoying intrusion of democratic processes.

That’s the point of a superb article published recently in the Washington Post. Here’s what happened, according to the Post:

The Bill and Melinda Gates Foundation didn’t just bankroll the development of what became known as the Common Core State Standards. With more than $200 million, the foundation also built political support across the country, persuading state governments to make systemic and costly changes . . .

Money flowed to policy groups on the right and left, funding research by scholars of varying political persuasions who promoted the idea of common standards . . .

President Obama seized the opportunity to push something through without congressional input. Gates’ influence permeated the administration.

While the Gates Foundation created the burst of momentum behind the Common Core, the Obama administration picked up the cause and helped push states to act quickly . . .

Several top players in Obama’s Education Department who shaped the administration’s policies came either straight from the Gates Foundation in 2009 or from organizations that received heavy funding from the foundation.

Before becoming education secretary in 2009, Arne Duncan was chief executive of the Chicago Public Schools, which received $20 million from Gates to break up several large high schools and create smaller versions, a move aimed at stemming the dropout rate.

As secretary, Duncan named as his chief of staff Margot Rogers, a top Gates official he got to know through that grant . . .

They figured out a scheme that avoided a lot of scrutiny, avoided Congress, and avoided the law.

They created Race to the Top, a $4.3 billion contest for education grants. Under the contest rules, states that adopted high standards stood the best chance of winning. It was a clever way around federal laws that prohibit Washington from interfering in what takes place in classrooms. It was also a tantalizing incentive for cash-strapped states.

The Gates Foundation gave $2.7 million to help 24 states write their Race to the Top application, which ran an average of 300 pages, with as much as 500 pages for an appendix that included Gates-funded research . . .

Before you knew it, Common Core was everywhere:

The result was astounding: Within just two years of the 2008 Seattle meeting (between Gates and Common Core developers), 45 states and the District of Columbia had fully adopted the Common Core State Standards . . .

Remember when you got a chance to contact your state legislator about his or her vote on Common Core? Don’t remember? That’s because YOU DIDN’T:

And yet, because of the way education policy is generally decided, the Common Core was instituted in many states without a single vote taken by an elected lawmaker. Kentucky even adopted the standards before the final draft had been made public . . .

A process that typically can take five years was collapsed into a matter of months.

“You had dozens of states adopting before the standards even existed, with little or no discussion, coverage or controversy,” said Frederick Hess of the American Enterprise Institute . . .

The movement grew so quickly and with so little public notice that opposition was initially almost nonexistent. That started to change last summer, when local tea party groups began protesting what they viewed as the latest intrusion by an overreaching federal government . . .

America’s children have been made guinea pigs for a scientific experiment that Gates and Obama thought looked good.

“Usually, there’s a pilot test — something is tried on a small scale, outside researchers see if it works, and then it’s promoted on a broader scale,” said Sarah Reckhow, an expert in philanthropy and education policy at Michigan State University.. “That didn’t happen with the Common Core. Instead, they aligned the research with the advocacy. . . . At the end of the day, it’s going to be the states and local districts that pay for this.”

And Gates stands to profit:

Some liberals are angry, too, with a few teacher groups questioning Gates’s influence and motives. Critics say Microsoft stands to benefit from the Common Core’s embrace of technology and data — a charge Gates vehemently rejects . . .

Gates grew irritated in the interview when the political backlash against the standards was mentioned. “These are not political things,” he said. “These are where people are trying to apply expertise to say, ‘Is this a way of making education better?’” . . .

Note the typically leftist, statist assumption at the heart of Gates’ comment. THE EXPERTS KNOW BEST. Voters don’t need to think about this. We’ll figure it out for you. It’s not political.

Well, everything is political. Otherwise it’s anti-democratic. And as with all such five-year-plan thinking, we may be headed for trouble:

Tom Loveless, a former Harvard professor who is an education policy expert at the Brookings Institution, said the Common Core was “built on a shaky theory.” He said he has found no correlation between quality standards and higher student achievement.

“Everyone who developed standards in the past has had a theory that standards will raise achievement, and that’s not happened,” Loveless said.

The standards have become so pervasive that they also quickly spread through private Catholic schools. About 100 of 176 Catholic dioceses have adopted the standards because it is increasingly difficult to buy classroom materials and send teachers to professional development programs that are not influenced by the Common Core, Catholic educators said.

Today, people have caught on. But the White House has been effective in the way the Left often is. As with Obamacare – and much of the Welfare Statte itself – the principle holds that it is much more difficult to abolish government programs than it is to prevent them from being established in the first place.

Common Core opponents will have to remove it state by state, and book by book. Like many other messes created by Obama, the stains may prove intractable.

36 thoughts on “How Obama Instituted Common Core on the Sly”