The White House has made it known that Our Leader is starting to wrap his mind around the possibility that Iraq could become an Islamo-terrorist state and that maybe he kind of needs to do something about it.

And so at the White House we’re weighing things, drawing up options, not taking any options off the table, and furiously scratching our asses, all as part of a classic Obama response to events that confound the smug certainty of his expectations. 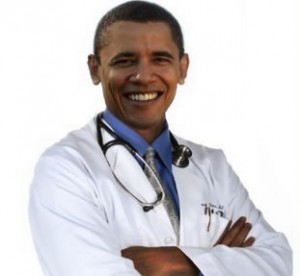 The world didn’t bend to Obama, and now – God help us – Obama may have to revise his assumptions.

Whatever your view of what should happen here, it’s worth wondering, WHY ARE WE MERELY MULLING OPTIONS?

The possibility of a major al Qaeda advance in Iraq has been apparent for weeks. The Iraqis begged us to preempt the whole mess by wiping out the bad guys while they were massed in their staging areas, to no avail. And now Obama, a day late and at least a dollar fifty short, will have to order an operation that is more sustained, complicated and risky.

Because you see, reversing the considered opinion of the august Dr. Obama can only be contemplated when the patient is at death’s door. Because for Dr. Obama, his ingenious decision to withdraw treatment cured the patient! And therefore, he refused to even schedule an appointment.

And so, Dr. Obama’s next round of treatments would have been ministered after the patient’s death – a kind of autopsy/embalming operation –  were it not for the patient’s decision to elicit a second opinion from the renowned Dr. Khamenei, whose cure is almost as bad as the disease, but who has eagerly swept into the operating room in the absence of Dr. Obama.

Of course, Dr. Khamenei, having opted to remain out-of-network with respect to the Obamacare Foreign Policy Exchange, will be demanding from the Iraqis payment in full.

That is, because Obama refused to leave a few thousand troops in Iraq, we may now be faced with a choice between a Sunni or a Shiite Islamist-terrorist state.

And that’s going to require years of preventative medicine!

52 thoughts on “Iraq: Dr. Obama is Researching a Cure!”