Hillary: The Money was Tight; We Struggled

Sorry, I had to put up another one of these videos.

Because Hillary is being awfully hard to put up with.

Mrs. Clinton did her version of a money-strapped average workin’ gal, saying that when she and Bill left the White House, they were “dead broke” and therefore needed the tens of millions of dollars he has made and the five mil she has recently raked in giving speeches to the National Association of Tuna Canners or whatever.

As with the post below, she’s speaking to ABC’s Diane Sawyer for an interview airing tonight.

You have no reason to remember, but we came out of the White House not only dead broke, but in debt. We had no money when we got there and we struggled to piece together the resources for mortgage’s for house’s for Chelsea’s education. You know, it was not easy.

This is the all-time Chutzpah award winning statement. I don’t whether to recoil in shock at the comment or at the incompetence of whoever dreamed it up.

Looks like Hillary’s having trouble getting good staff again.

We struggled? For money? YOU? Are you freaking kidding me?

First of all, let’s talk about the debt. The debt, I presume, was largely amassed as a result of Bill’s having to lawyer up because he had illicit sex in the White House and then lied about it to a grand jury. These are not debts amassed because, say, you lost your job or you needed to buy shoes for your kids.

Now. Mortgages. The Clintons purchased this rundown little shack in Chappaqua, New York in 1999, as his presidency was winding down. According to Zillow, it cost just shy of $6 million. 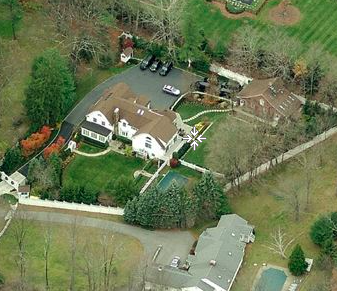 Just a couple of kids tryin’ ta make it in New York.

It has five bedrooms, a large outdoor swimming pool, a pool house, tennis court, guest cottage, and an indoor pool fitted with a sauna, wet bar and a sun room.

Thank God they made it through this difficult time.

Here’s a song for Mrs. Clinton.

77 thoughts on “Hillary: The Money was Tight; We Struggled”