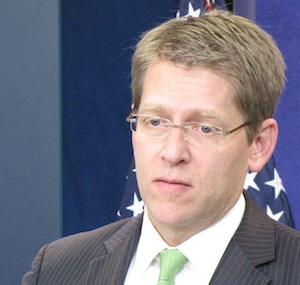 Carney said he will step down soon, probably the second or third week of June. He will leave the White House but says he has not decided where he will go, though he has offers on the table..

“It’s been an amazing experience, just, so fulfilling,” Carney said, thanking the president and vice president.

Obama said Carney had come to him in April saying he wanted to leave. Asked in March about rumors he was angling for the job of ambassador to Russia, Carney said, “I have a great job that I love.”

Carney, 49, began as press secretary in February 2011 after working in the thankless job of spokesman for Vice President Joe Biden since the start of the Obama administration.

His term as press secretary has been characterized by a fairly rocky relationship with the press and accusations from many quarters that the White House was failing to live up to promises of transparency, including this week when the White House failed to reveal a lunch between Obama and Hillary Clinton. This even though Carney himself worked for years as a reporter himself, including as Washington bureau chief for Time Magazine.

Earnest has a smoother relationship with many reporters, though his ties to the press will be tested by the demands of his new, high-profile role.