But now there’s a better way.

“This is about opposing so many thousands of acres that is going to create nothing more than a pathway for criminals to get into this country to do their criminal acts,” local sheriff Todd Garrison told The Washington Times.

From the Times piece:

Sheriff Garrison said that will shut down roads that his department uses to patrol the land, though he said the cartels are unlikely to stop using it just because it is declared wilderness.

“My fear is these areas will be used more than they are now because they’ll have access to it that will be private and closed off to every law-abiding citizen,” he said. “I believe this monument will hamper law enforcement’s ability to effectively patrol the area we need to patrol.” . . .

Rep. Rob Bishop, a Utah Republican who has studied the issue, argues that the environmental restrictions have indeed hurt the Border Patrol’s ability to do its job.

Hours before news of the designation broke Monday, Mr. Bishop, chairman of the Natural Resources Committee’s public lands subcommittee, sent a letter to Mr. Obama asking him to hold off until the border can be controlled.

The local congressman whose district includes the land, Republican Rep. Stevan Pearce, has written legislation that seeking a monument about a tenth the size of Obama’s. So much for what the locals the want.

But this could come back to haunt Obama. House Speaker Boehner suggested Wednesday that the move could help dash Obama’s immigration reform legislation hopes, stoking fears Obama will enforce the law only to the extent of his liking.

The president’s announcement today intensifies those concerns, demonstrating a level of audacity that is remarkable even for this administration.

Once again, the president has chosen to bypass the legislative branch — and, in this case, do so in a manner that adds yet another challenge in our ongoing efforts to secure our southern border.

Of course, the monument will help Obama continue to gobble up loads of enviro-cash from overpaid Hollywood and Silicon Valley Democrats while he waits to nix the Keystone pipeline, which he doesn’t want to do before the election because it could hurt red-state Dems.

And soon he’ll accuse Republicans of playing politics on immigration and hating Hispanics.

BECAUSE THAT’S THE WAY OUR PRESIDENT ROLLS.

Meanwhile, to our Mafioso friends from South of the Border, enjoy the view! And the awesome hiding places. 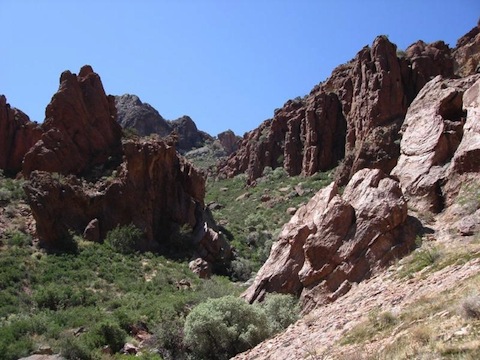 H/T to one of our readers, Sadie, who alerted me to this issue.