A somewhat bedraggled and not particularly angry-looking President Obama took to the briefing room today to attempt to shirk blame for the burgeoning VA scandal, saying the problem began before him and touting the “progress” he has made fixing the various messes littering the agency. 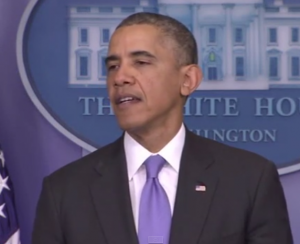 No doubt Shinseki will be allowed to retire peacefully in six months, like Sebelius did after the Obamacare rollout catastrophe, without the suggestion entailed in a firing that Obama made a mistake by hiring him in the first place.

But Obama nevertheless warned he might eventually decide to get rid of Shinseki, whose head is being called for from many quarters.

If you ask me, you know, how do I think Rick Shinseki has performed overall, I would say that on homelessness, on the 9/11 GI Bill, on working with us to reduce the backlog across the board, he has put his heart and soul into this thing and he has taken it very seriously.

But I have said to Rick, and I said it to him today, I want to see, you know, what the results of these reports are, and there is going to be accountability.

Or maybe Rick will just go away.

I know that Rick’s attitude is, if he does not think he can do a good job on this and if he thinks he’s let our veterans down, then I’m sure that he is not going to be interested in continuing to serve.

Obama of course asked George W. Bush and every other president to share in the blame, and suggested he was trying to fix their mess.

Some of the problems with respect to how veterans are able to access the benefits that they’ve earned, that’s not a new issue. That’s an issue that I was working on when I was running for the United States Senate. Taking care of our veterans and their families has been one of the causes of my presidency.

But this absolutely begs and pleads the question, If this is your cause, why have you failed? People have died. Sorry, but you can’t cook up a meal that causes food poisoning and then tell everyone you spent hours in the kitchen and, at least it tasted good.

Well, in Obama’s mind, he hasn’t failed at all.

The president sought to highlight that many things at the VA are going much more swimmingly as a result of his presidency. At a moment when veterans are dying needlessly under his watch, Obama went into full spin mode.

We have made progress over the last five years. We’ve made historic investments in our veterans. We’ve boosted VA funding to record levels. And we created consistency through advanced appropriations so that veterans organizations knew their money would be there regardless of political wrangling in Washington.

We made VA benefits available to more than 2 million veterans who did not have it before, delivering disability pay to more Vietnam vets exposed to Agent Orange, making it easier for veterans who have post-traumatic stress and mental health issues and traumatic brain injury to get treatment, and improving care for women’s veterans.

Because of these steps and the influx of new veterans requiring services added in many cases to wait times, we launched an all-out war on the disability claims backlog. And in just the past year alone, we’ve slashed that backlog by half.

And I think it is important to recognize that the wait times generally — what the IG indicated so far, at least, is the wait times were folks who may have had chronic conditions, were seeking their next appointment, but may have already received service. It was not necessarily a situation where they were calling for emergency services. And the IG indicated that he did not see a link between the wait and them actually dying.

Well, the IG is hardly finished. And there appear to have been some who committed suicide while they were waiting.

I’d be very surprised if, given the delays and incompetence, there weren’t may deaths directly caused by the VA. Even if it were possible nobody died because of their wait, it would merely be fortuitous. Like a defendent saying, Well, I tried to murder my boss, but at least I didn’t succeed!

Taking care of our veterans and their families has been one of the causes of my presidency. And it is something that all of us have to be involved with and have to be paying attention to . . .

Even as we get to the bottom of what happened at Phoenix and other facilities, all of us, whether here in Washington or all across the country, have to stay focused on the larger mission, which is upholding our sacred trust to all of our veterans, bringing the VA system into the 21st century, which is not an easy task . . .

So we’re going to have to redouble our efforts to get it right as a nation. And we have to be honest that there are and will continue to be areas where we’ve got to do a lot better.

As a nation? I didn’t realize – what’s a matter with you people? Why don’t you care enough about our veterans?

Obama pledged to work with Congress, but he laid the groundwork for the usual round of calumny from Obama and his political goons, in this case meaning that if Republicans see something that stinks, he’ll accuse them of doing a political dance on the graves of our fighting men and women:

It is important that our veterans don’t become another political football, especially when so many of them are receiving care right now.

Obama also announced that he was tapping the foxes to investigate the tragedy in the chicken coop, establishing two separate reviews, a near-term look by Shinseki and a longer-term “comprehensive” study by Obama’s White House fixer, Deputy Chief of Staff Rob Nabors.

If a scandal that caused the deaths of veterans doesn’t cry out for an INDEPENDENT review, I don’t know what does.

Meantime, there’s plenty of proof already of gross negligence and incompetence. Obama should fire Shinseki and start taking drastic actions to fix things now, while also probably studying how to privatize the system.

“If these allegations prove to be true, it is dishonorable, it is disgraceful, and I will not tolerate it, period,” Obama said.

Oh, so that’s why he didn’t seem very angry today. But look out, he’s gonna get angry pretty soon!