The Five Things Hillary is Known for are Bad Things

Here’s why Boko Haram is awful news for Hillary: Because it adds to the list of things she is known for. AND ALL OF THEM ARE BAD. 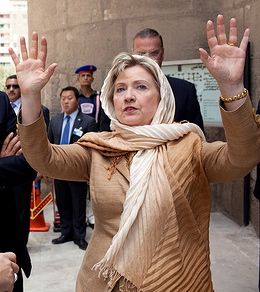 Hillary Clinton is running on fumes. The fumes of fame. There is no other reason that people will vote for Hillary Clinton other than that she is famous. Many others share her ideas. Some state them more eloquently. But Hillary is more famous.

Hillary’s problem is that, at a certain point in the Democratic primaries, someone else will become equally famous. As will the Republican nominee. And then, people will have to look at Hillary’s record. And that’s where her problems will really begin.

Because her record, you see, in the public mind, consists of these five things:

1. Benghazi: Clinton has failed to offer an explanation for why the diplomatic post wasn’t well defended. And she hasn’t fully explained what she did the night of the attack.

2. The Russia Reset: The button was incorrectly translated, to start with. And pushing it seems to have bounced us back into the Cold War.

4. Hillarycare: There is, of course, no Hillarycare. It became Obamacare. It was her biggest political assignment, and she blew it. That Obama succeeded where she failed will remind voters that with Hillary, they’re settling for an also-ran. The woman Obama beat. Second best.

5. Boko Haram: Despite urging from serious people within the Obama’s own administration, Hillary’s State Department failed to label Boko Haram a terrorist outfit. There were real reasons for this based in policy, but we may never know the extent to which the political exigency of minimizing the existence of terrorists as Obama sought reelection was the true driving factor. No matter, the decision looks bad today and is irrevocably associated with Hillary.

And so, I present this wistful song written by Boko Haram during the summer of ’67, when Hillary was soaking up socialism at Wellesley, as an elegy to her and her likely failure in the 2016 campaign.