President Obama is under growing pressure to do more to rescue the nearly 300 girls kidnapped by the blood-drenched Islamist terrorist outfit Boko Haram.

His response so far has been measured and reasonable, including the dispatch of advisors to offer technical help and negotiating expertise. He ought to resist demands that he do more.

Hollywood has seized the issue. Anne Hathaway has taken to the streets. Michelle Obama tweeted out a photo of herself holding a sign saying, #BringBackOurGirls, amping up the pressure. She took over this week’s White House address and devoted it to the Nigerian girls:

In these girls, Barack and I see our own daughters. We see their hopes, their dreams – and we can only imagine the anguish their parents are feeling right now.

We have air and sea and satellite capabilities. We have drone capabilities. We should say to the Nigerian government, this is an offense to all human beings. We’re going to act. And we expect you to cooperate with us.

No, that’s not what we should do.

Obviously this is a horrible tragedy. It’s sickening and just very, very upsetting.

The United States is right to try to help. But we cannot become widely involved in the horrors of every barbaric nation where there are atrocities. We certainly cannot get in a position where U.S. prestige and credibility, already deeply harmed by this president, is again on the line.

Because in all likelihood, short of a major operation, these girls cannot be rescued from the dense forest the size of West Virginia where they have been taken. 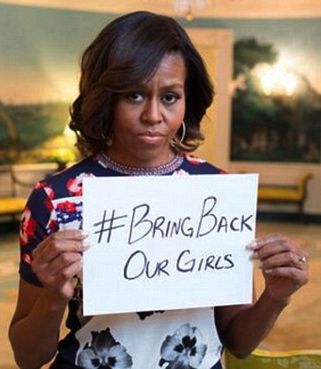 These are not, in fact “our girls.” Our girls are here in the United States, and we have to follow policies designed to protect them and ensure their wellbeing.

And I don’t want one single of our girls to be grieving for her dad who was killed in the jungles of Nigeria by one of these animals.

U.S. troops are a precious and increasingly scarce resource to be used only in cases where U.S. national security demands it. As far as I can tell, Boko Haram is an indigenous Nigerian phenomenon of the type that is not at all unfamiliar to that country. And it is, at this point, far too crude an organization to be a worldwide threat.

We are not going to civilize Nigeria. We can offer some limited amount help in this situation. The demands of those who have gotten all spun up about this – most of whom wouldn’t get close to the snake-infested jungles where they’d gladly send the SEALS – must be resisted by Obama.

You’ve got it right, Mr. President. Stay the course.

68 Responses to Obama Gets it Right on Boko Haram