Yeah, dude, we did it. Pulled it out. High five! Neanderthals lose again. Big win for liberals.

That was the tone at the White House earlier this month as President Obama announced that Obamacare had made it’s signup goal, topped it even. We proved ’em wrong. This can work. 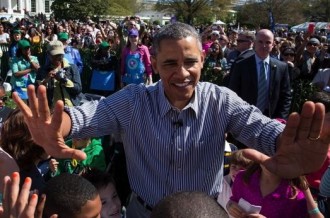 But Americans are finished being lied to about Obamacare. They get that the federal government having to devote massive resources to fix – partially – a massive problem says only bad things about government. They know that someone who missed class all year, didn’t hand in the assignments, and then crammed all night and barely passed the final is still a screw up.

That’s the message from the latest Washington Post-ABC poll, which finds that 57 percent of Americans disapprove of the way President Obama is implementing Obamacare, with only 37 percent approving, a stunning vote of no-confidence.

Moreover, support for Obamacare, which was higher in this poll than others, dropped from 49 percent in March to only 44 percent today, with 48 percent opposing in both polls. Forty four percent think the nation’s health care system is getting worse, compared to 24 percent who think it’s getting better, and 47 percent think Obamacare is raising their health care costs, compared to eight percent who think it’s decreasing them. That’s right, eight. Eight percent. Others said costs are about the same.

Remember, this thing is actually called the Affordable Care Act. And more-affordable care is what we were promised.

Obama has his lowest approval rating ever in the poll, at 41 percent. Fifty four percent disapprove of his handling of the economy, 66 percent say the country is on the wrong track.

Obamacare is a catastrophe. Americans know it. The question is whether they are going to do anything about it.