President Obama’s foreign policy is a disaster. He cruised along for awhile, but then the rest of the world figured him out and started taking matters into their own hands, for which the Devil has made ample use.

And now, as everyone can see, we’re in deep doodoo in every corner of the globe.

The president came into office with one thing in mind: To “fundamentally transform” the United States into a a kind of Northern Cuba where he could “spread the wealth around” to the poor from the rich, the upper middle class, and anyone else who’d gotten to the “point” where they’d “earned enough money.”

Foreign policy and the wars the United States has been fighting were a terrible distraction for Obama. Sure, he wanted to do his best to protect the country – kill bad guys with drones, etc. – but otherwise the goal was to wind down the wars in Afghanistan and Iraq and pay minimal attention to world affairs.

2. Obama is a naïve peacenik

I’m a peacenik too, but hopefully not a naïve one.

If you went to college, Obama was the guy whose room you went to smoke pot – he knew where to get the Hawaiian!! – and talk about how Ronald Reagan was a dunce who starred in a movie with a monkey, how the United States was spreading its capitalist, imperialist philosophy of greed around the world, and how Communists in Latin America were just trying to make a better life for their people.

Such thinking – this trust in the benign intentions of those who want to destroy us combined with a mistrust of the West – still animates this president. This is why he fails to understand that Islamists want to first do Eurpostan and then move on to Ameristan – and can’t be trusted to, say, run Egypt – and that bad people will try to extend their influence around the world as we pull back from it.

3. Obama is not ready for prime time

Obama not only was bereft of any serious experience before becoming president, but he lacks, as my gastroenterologist would say, the intestinal fortitude for the job.

He draws red lines, and then whimpers away. He makes tough statements without the means to back them up. He fails to even try to bend others to his will, unless they’re Israeli. He lacks the relish for mixing it up in the ring when he has to, the boyish pugilism that comes out when a great leader needs it. He’d rather play golf. 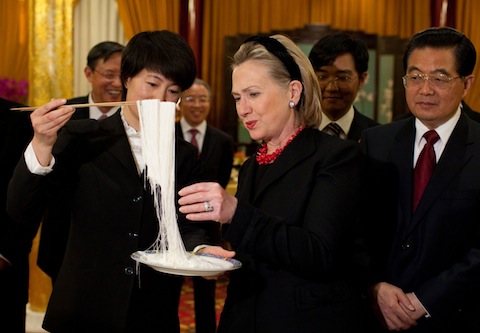 Hillary Clinton was a disastrous choice for Secretary of State, and a choice made for all the wrong reasons.

She had absolutely no qualifications for the job, no serious understanding of foreign policy, and nothing resembling a strategic vision. She’s Henry Kissinger, except without the Henry Kissinger. You don’t hear about an Obama Doctrine because there is none. There are no guiding principles to this president’s foreign policy, because there was no one around to think any up.

I believe that Hillary was chosen as Secretary of State because Obama’s political advisors told him to do it.

Hillary was Obama’s chief political rival among Democrats. The only presidents in the last 50 years who either lost their reelection race or figured they didn’t like their chances and decided not run – Lyndon Johnson, Gerald Ford, Jimmy Carter, and George H.W. Bush – all had serious challengers from within their own Party.

Hillary had to be removed. And so he put her on political ice in the most effective way possible: by bringing her in at a very high level.

Also, he read a book that said Lincoln surrounded himself with his political rivals, and Obama wanted to be like Lincoln.

But a president needs a good Secretary of State. And Obama got one who failed to lodge a single noticeable foreign policy achievement during her four years on the job.

And so neither has he. And now, the lack of attention and competency is causing hundred of venus flytraps to bloom all over the world.