Apparently, all that spontanaiety you see from Michelle takes a lot of planning. 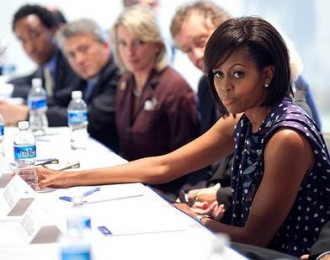 Cherlin was an aide I dealt with frequently before he left the West Wing a couple of years ago to become a freelance writer.

While he was a committed Obama staffer who never “went off the reservation” by dissing the boss or giving me something I wasn’t supposed to have, I didn’t get the sense he had drunk the Kool-Aid as fully as some of the others who worked there or that he was as willing to torture small animals, lie, or do whatever it took to make Obama and his agenda look fantastic.

Cherlin actually treated the press with some respect, which for all I know got him in hot water. He’s not like some of the other former aides from various White House operations who have cynically glided from fangs-bared propagandizing to supposedly unbiased or at least thoughtful journalism.

I realize none of this helps Reid with his ex-colleagues.

Here are some excerpts I’ve strung together from his piece:

The first lady’s office can be a confining, frustrating, even miserable place to work. Jealousy and discontentment have festered, as courtiers squabble over the allocation of responsibility and access to Mrs. Obama, both of which can be aggravatingly scarce. Fueling these sentiments, according to former East Wing insiders, is the exacting but often ambivalent leadership style of the first lady herself.

Unlike her husband, who derives visible satisfaction from his ability to improvise, Mrs. Obama depends on structure to support her public warmth—the ease with which she’ll pick up a hula-hoop, say, or do the Dougie with school kids.

The imperative to guarantee results could be paralyzing. “That was the pressure on us,” one ex-aide told me. “‘Don’t do it if it’s not going to be perfect.’” Staff knew that every event should produce positive coverage, and that all the angles had to be exhaustively researched and gamed out (not easy with a team of less than 30).

But it was never completely clear what the standard of perfection should be. “There’s no barometer: The first lady having the wrong pencil skirt on Monday is just as big of a fuck-up as someone speaking on the record when they didn’t mean to or a policy initiative that completely failed,” says another former aide. “It just made you super anxious.”

Former staffers describe a high-stress, high-stakes workplace, in which Mrs. Obama scrutinized the smallest facets of her schedule. Aides in both wings of the White House say she insists on planning every move months in advance and finalizing speeches weeks ahead of time—a rigidity nearly unheard of in today’s chaotic political environment.

“For her, trust is huge, really feeling like people were protecting and thinking about her,” says one alum. “And then, also, she’s a lawyer. She’s really disciplined. She cares about the details. She’s never going to wing it.”

All of this led to a culture of harsh internal judgment. Invitations to meetings with the first lady, in her office above the Jackie Kennedy Garden, became a vital status symbol, a way for staffers to measure their worth. “Every meeting was like an identity crisis, whether you got invited or not,” one former East Winger told me . . .

Whoever the chief of staff has been, Cherlin makes clear that the real power behind the throne is Valerie Jarrett, who gives the orders. Also very powerful is Sam Kass, who seems to have risen from Obama chef and gardener to all-round advisor and general-purpose guru.

They’ve become personal friends even intimates of the first lady, which Cherlin makes suggests, is what it takes to really succeed in the East Wing.

Talk about an unfair work environment.