Yes, the battlers for the struggling middle class were planning to go on vacation AGAIN this weekend, but the happy idyll may be RUINED by world events.

It would be the Obamas’ – each of them – third vacation of the year. And it’s only March.

But alas, it may not come to pass. Get out your handkerchiefs or find a good shoulder to cry on, because this is a sad story.

President Obama – and according to likely plans, Mrs. Obama – are headed to Miami Friday for an event about education and the economy. At a high school – you know, the type of place where Obama’s numbers are still through the roof.

Now, not one to waste an opportunity, a Florida vacation is – or was – in the works too. “Word in the Florida Keys is” that the president, Michelle and the girls might finish out the weekend at the Ocean Reef Club in north Key Largo, writes the Miami Herald. 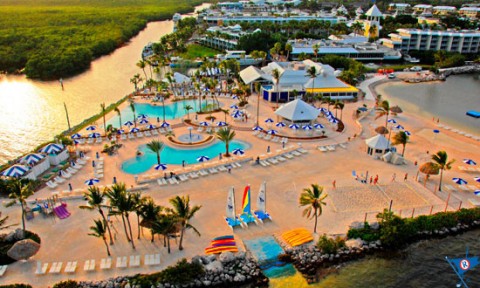 But Politico is reporting that events in the Ukraine may wash the Reef Club plans away with the surf. Just might not look too great if you’re trying to stare down the Russians from the beach!

“The president had planned to stay in South Florida with his family for the remainder of the weekend,” White House spokesman Josh Earnest said. “However, it is possible the president may return to the White House on Friday as events unfold in Ukraine.”

Obama isn’t expected to head to Kiev or anywhere else if the weekend in Florida gets scrapped, but more likely have a repeat of last weekend, which he spent in briefings and on the phone with foreign leaders after Putin began moving troops into Crimea.

Such drudgery. Oh well, we all have day jobs.

UPDATE: The vacation has not been cancelled.

140 thoughts on “Another Obama Vacation?”