Who, exactly, is running The Flat Earth Society? is the question asked by atmospheric scientists Richard McNider and John Christy in today’s Wall Street Journal.

The original flat earthers were the dominant scientific theorists who were as certain as they could be that you could sail right off the face of the earth. Those opposing them were a minority who risked ridicule questioning what was deemed obvious.

Secretary of State John Kerry, with the kind arrogance that no doubt endears him to President Obama and many of his top aides, stated this week that the “Flat Earth Society” opposing our president’s will on global warming would not get their way and, what’s more, they suck:

This Kerry says as he lets the Iranians acquire actual weapons of mass destruction and strikes a deal with the Russians that will permit Bashar Assad to maintain his.

WHY DON’T YOU JUST STICK TO DOING YOUR JOB INSTEAD OF TRAVELING THE WORLD PONTIFICATING ABOUT GLOBAL WARMING??

Anyway, McNider and Christy offer up tangible facts that suggest Kerry can stop pissing in his pants about global warming right away.

They believe, as do most scientists who are global warming skeptics, that there is some warming that has been caused by human activity. They question, however, how much of a danger this is and whether we need to revamp our economy, given that the warming has been not much and not nearly what the John Kerry Flat Earth Society – hereon to be referred to as JKFES, or just JokeFest – predicted.

It seems JokeFest has been completely mistaken in its near term predictions about warming. As an economics professor of mine used to say before drawing a graph for us, consider the following: 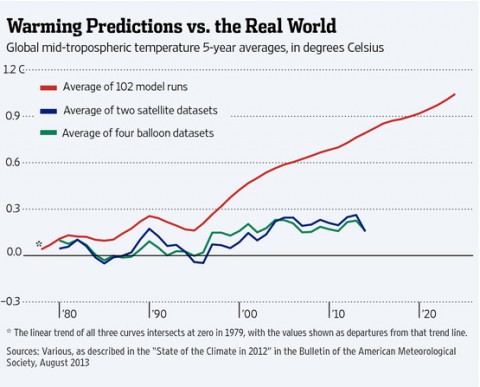 Essentially, the red line is what JokeFest said global warming would be. The blue and green lines show the actual warming. As you can see, if you have considered the previous, we have had less than HALF the warming predicted.

What’s more, if you take as your starting point the average temperature from 1979 through the mid 90s instead of the 1979 level of zero, the warming has been even less compared to what was predicted.

What is not a known fact is by how much the Earth’s atmosphere will warm in response to this added carbon dioxide. The warming numbers most commonly advanced are created by climate computer models built almost entirely by scientists who believe in catastrophic global warming. We might forgive these modelers if their forecasts had not been so consistently and spectacularly wrong.

And as I noted yesterday, these mistakes could come back to kill us in the flimsy cars Obama and the JokeSters have planned for our future.

I’ve noted how, as the evidence piles up that the earth isn’t warming much at all, the JokeSters have become exponentially shriller. It’s because they know that, like the flat earthers, their theory is in danger of contravention by observed facts, like Columbus sailing the ocean blue.