Five years into President Obama’s administration and more than six years after the recession began, unemployment is the biggest concern troubling the minds of Americans, according to a new Gallup poll.

Americans, it appears, are not buying the rosy White House line about all the jobs being created and all the “consecutive months” of job growth. They get that the unemployment rate is going down because people are giving up the search. And most of all . . .

THEY’RE LOOKING FOR JOBS AND CAN’T FIND THEM.

Here are the top ten concerns: 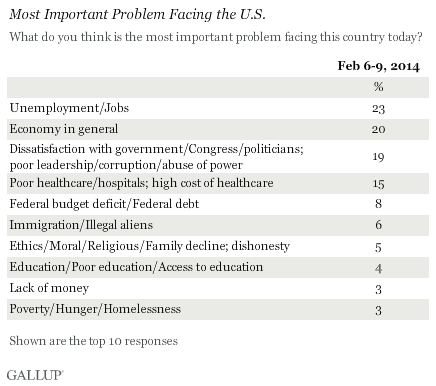 The second biggest concern is the economy, which begs the question:

WHAT HAS OBAMA BEEN DOING THE LAST FIVE YEARS??

Notice the disconnect between what Americans care about and where Obama’s head is at.

Health issues are fourth on the list, viewed as the biggest problem by only 15 percent. Immigration, Obama’s top second term policy priority, is the top concern of just six percent of his subjects. And Obama’s overriding second term focus, “income inequality” – as represented by the category “poverty/hunger/homelessness” – comes in tenth at three percent. Gun control didn’t even make the top ten.

We have a president pursuing his own ideological agenda while the nation continues to suffer. And nothing will change for the next three years. So let’s learn to love it!