It’s her third time in Aspen after hitting the slopes in Vail back in 2011. “She likes it here,” said local Sheriff Joe DiSalvo, according to the Aspen Daily News. Reasonable deduction. 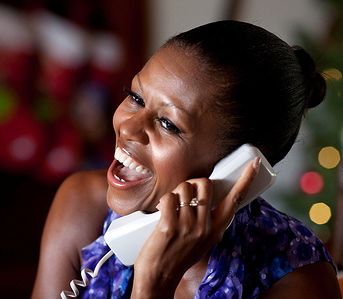 Michelle is once again at the home of Jim and Paula Crown, major Democratic donors who own the Aspen Skiing Co.

According to the New York Post, Mrs. Obama’s arrival shut down the Aspen airport for an hour on a high travel day, forcing other vacationers to cool their heels on their private jets as they waited for Michelle to land and disembark.

One of our readers wrote Friday that he had “spotted a caravan of about 7 black SUVs with a police escort leaving the Aspen airport. In all likelihood that was her.

White House Dossier of course broke the story Friday that Michelle was skiing Aspen disguised as a Babushka.

By skiing in a tony Colorado location, Mrs. Obama – who in an reference to greedy Republicans asked “Who are we?” repeatedly during the 2012 campaign – chose the most the expensive location for taxpayers possible short of heading to the Alps. She took an Air Force jet and a cargo plane 2,000 miles across the country so she could slide down America’s most powdery slopes beside its wealthiest skiers.

There are plenty of mountains along the East Coast, including right here in beautiful Virginia – those just a chopper ride away – that could surely have sufficed for a modest skier like Mrs. Obama.

And now that global warming is causing global cooling, the hills presumably have the high-quality snow Michelle covets!

140 Responses to Michelle Lands in Aspen