The couple has a tradition of vacationing separately on President’s Day weekend. He golfs, she skis. But so far, no word on Michelle’s whereabouts.

That’s why, as editor of White House Dossier, I dispatched three reporters to Colorado – one to Aspen, one to Vail, and one just to get high. And lo and behold, our reporter in Aspen found Michelle hurtling down a mountainside disguised as a Russian Babushka. 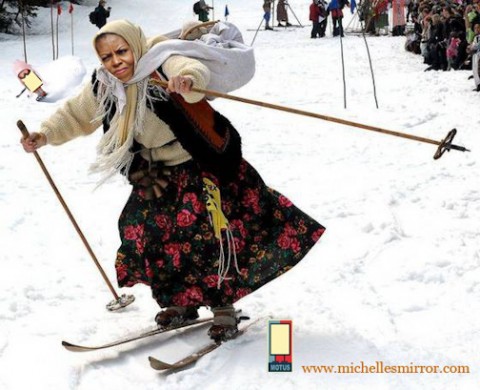 “Her outfit is a tribute to Sochi,” said one source close to the first lady. “She wants to express solidarity with the Russian people as they host the Olympic games.”

Well, Michelle is kind of missing the boat. The Russian look has definitely been updated since the fall of Communism.

But Michelle’s Russian peasant garb is also meant to contrast with the $12,000 dress she wore to the State Dinner this week for French President Francois Hollande.

“Mrs. Obama likes to remind us she’s both a member of the Kulak class and a gal of the proletariat,” said White House Press Secretary Jay Carney. “Everyone knows the first lady shops at Target. Well it so happens she also gets her clothes at second hand shops in Brighton Beach.”

Carney refused to comment on reports that she threw a samovar at President Obama as he left her this morning on Valentine’s Day.

H/T to Michelle Obama’s Mirror for the skiing photo.

51 Responses to Michelle Obama Discovered Skiing Disguised as a Babushka