President and Mrs. Obama have been claiming lately that Let’s Move has reduced childhood obesity in the United States. Victory for executive action out of the East Wing! 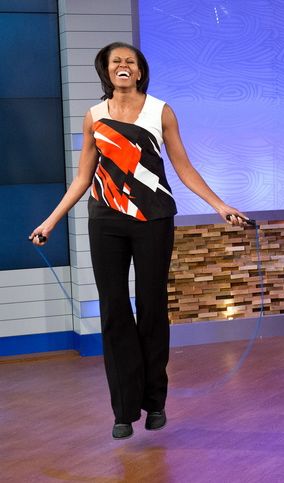 Michelle has bragged on it, and Obama even lauded her fat reducing ways during the State of the Union speech, proclaiming: “Michelle’s Let’s Move partnership with schools, businesses, and local leaders has helped bring down childhood obesity rates for the first time in 30 years.”

Apparently, this is because just THE THOUGHT of Let’s Move makes children skinny. That’s right, just thinking about it! Because most of the reduction in the U.S. population of fat kids that has occurred over the last few years happened before Let’s Move.

According to National Review, childhood obesity rates began declining among low-income children in 2008, two years before Michelle unveiled her pet project in February 2010. “The actual implementation of Let’s Move came ten months later, when the Healthy Hunger-Free Kids Act was passed in December 2010,” reports NR. “Obesity rates were well on their current trajectory before Let’s Move had any influence.”

What’s more, the centerpiece of the Let’s Move program, Spartan school lunch menus, was scaled back after garbage cans began to buckle under the weight of discarded food and kids complained that they were hungry.

Maybe just thinking about what Let’s Move used to be will also reduce kids’ waistlines. Let’s hope so.