First Lady Michelle Obama failed to accompany President Obama and their daughters home from Hawaii today, a decision that will likely incur taxpayers at least a couple of hundred thousand dollars in costs. 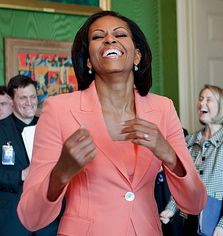 The White House described the move as a “birthday gift” from President Obama to his wife,  allowing her to “spend times with friends ahead of her upcoming 50th birthday,” which occurs January 17. But for this gift, you are footing much of the bill.

I estimated some costs a year ago when, on their previous vacation to Hawaii, it appeared that Michelle was going to stay in Hawaii while her husband went home to deal with a problem he was having with Congress:

Assuming Mrs. Obama uses the type of plane she has flown before to Hawaii, the Air Force C-40B Special Mission Aircraft, the cost of a flight from Honolulu to Washington would be about $63,000. If the C-40B must be flown out to Hawaii to retrieve Mrs. Obama, as would seem likely, the first lady’s travel costs could amount to about $126,000, assuming the jet is dispatched from Washington.

And the cost would be much higher still if a supply-carrying cargo jet comes home along with Michelle in addition to the cargo jet that accompanies Air Force One – particularly if that jet too must be flown out to Hawaii just for Mrs. Obama.

Once you throw in the tens of thousands of dollars that must be dished out to house, pay, and support the military and Secret Service assets enlisted to protect Mrs. Obama – as well as other support staff – the price tag for her stay is probably in excess of $200,000, and possibly much more, depending on how long she remains on vacation.

Instead, last year Obama returned to Hawaii to resume his vacation after finishing up with Congress, at a far greater cost to taxpayers due to the much higher price tag for flying Air Force One.

That would seem unlikely this year, but anything’s possible.

111 Responses to Your Birthday Gift to Michelle