I have finally figured out the Obama Doctrine: Screw up the hard fought gains handed him by George W. Bush.

President Bush left office with al Qaeda desperately trying to blend in with camel herds in the desert and Iraq mostly pacified. Today, none of that is true.

The newspapers are reporting this morning that al Qaeda is in control of Fallujah. What an awful, searing irony.

Hundreds of American service members were killed and wounded during three battles that finally resulted in complete victory and the United States turning Fallujah over to Iraqi control in 2007. But the very Islamist insurgents we removed from Fallujah are back and, for now, running the place. 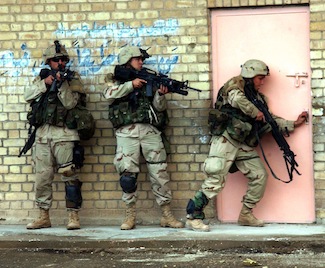 It’s heartbreaking to think of the sacrifices our armed forces made being squandered. What’s more, squandered at the very moment this disengaged president putts away in Hawaii.

Obama once tried to claim Bush’s Iraq success as his own. “Today – even as terrorists try to derail Iraq’s progress – because of the sacrifices of our troops and their Iraqi partners, violence in Iraq continues to be near the lowest it’s been in years,” Obama declared in 2010 as he touted his head-for-the-exits-at-all-costs strategy.

Obama eventually decided to leave a token force of 3,000 troops in Iraq, far fewer than commanders on the ground thought prudent. The Iraqis decided that Obama’s pittance wasn’t worth the political grief they’d get for having Americans roaming around their country, and so they said he could keep them.

I predicted in 2011 that Obama’s dash for the exit was a mistake that would result in continued violence and threats to U.S. interests.

But Obama sought to frame the failure to keep any troops at all in Iraq as a grand success, hoping to turn it into political gold. He made sure to email his campaign list to proclaim that he ended the Iraq war:

When I came into office, I pledged to bring the war in Iraq to a responsible end. As Commander in Chief, I ended our combat mission last year and pledged to keep our commitment to remove all our troops by the end of 2011 . . . This is a significant moment in our history.

Leaving 10,000-15,000 troops in Iraq would have been hard, but it would have been worth it to check Iran’s influence in the country and help the Iraqis keep al Qaeda under wraps. In other places where we’ve been victorious in war, we’ve left troops and it’s worked.

But Obama doesn’t understand this. He doesn’t get that we’re in a struggle with Islamists who can’t be pacified and who aspire to kill thousands of our citizens – millions if possible.

I don’t think Obama is particularly interested in foreign policy. He wants to focus on cementing socialism in the United States, and he hopes the bad guys will just go away.

Well they don’t go away unless we keep the pressure on them. And unless we kill them when we have to.

Thats what our men and women did in Fallujah. I mourn for those who died or were wounded in the horrific battles for the city, and for those who today are watching as their heroic effort is wasted by this president.