Another year, another waste of taxpayer money so that the Obamas can spend Christmas in paradise.

I’ve reported in the past that the annual trip to Hawaii costs taxpayers at least $4 million. It’s probably much more.

Air Force One alone burns up about $180,000 of taxpayer money per hour, putting the roundtrip flight alone at $3.24 million for an estimated 18 hours roundtrip flying time. 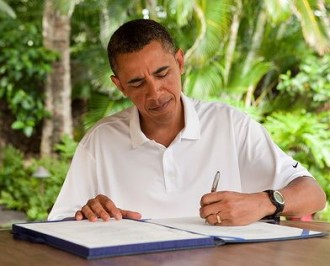 But that doesn’t even include at least one cargo plane that accompanies the president, since the motorcade doesn’t just materialize out of a Hawaiian pineapple field.

Hundreds of staff and security agents must also make the trip. And they must be put up in hotels at vacation-season prices for the 17 days or so that the Obamas plan to spend on Oahu. There are rumors of a side trip to Maui, according to the Hawaii Reporter, which has a good rundown of the vacation-related costs.

An Obama getaway to Miami – five hours roundtrip from Joint Base Andrews – would save millions.

Oh, but Obama is from Hawaii. He’s going home, weep the defenders of this massive indulgence.

Oh please. Yes, the man was born in Hawaii and lived there from the age of ten through high school. I wanna know, how many of you who don’t live in your home state can afford to go back there every year, or even feel the need to? Are the Obamas like salmon that must swim from the far reaches of the ocean to spawn on the upstream gravel beds of the river where they were hatched?

And poor Michelle. Somehow the Obamas never spend Christmas in her homeland of Chicago.

You know why? BECAUSE THEY’D BE FREEZING THEIR ASSES OFF.

Let’s face it, the Obamas go to Hawaii every year mainly because it’s really nice. I was in Hawaii once. Not only is the weather balmy and scenery exquisite, but the whole place gives off an aura of relaxation, a sense that there’s no need to do anything and nothing to worry about.

Honestly, I don’t know how any work gets done in Hawaii at all.  If I could afford to go there every year – particularly nonstop, first class – I would.

I’m not sure that the Obamas can afford to go there every year. But with your help, they can make it happen!