South Africa’s African National Congress today announced that it has fired sign language interpreter Thamsanqa Jantjie and plans to replace him with veteran interpreter for the deaf Garrett Morris.

Jantjie fell into official disfavor when he used nonsense signs to interpret for world leaders at Tuesday’s memorial for Nelson Mandela. Morris, saying he was eager to help out, quickly accepted the position.

“I’m honored that the ANC has asked me to step in during a moment of need and I plan to use my interpretive skills to the best of my ability,” Morris told White House Dossier

An ANC spokesman said South Africa’s ruling party was gratified that Morris accepted the position with such alacrity.

“We made a mistake with Jantje, clearly. Now we’re going top shelf,” the spokesman said.

Problems could arise, however, given that Morris hasn’t practiced his craft for years and may be rusty. His last known work as an interpreter for the hard of hearing, seen here, was back in the 1970s.

A White House official applauded the move, saying HHS was looking into hiring Morris as the official sign language interpreter for videos found on the website Healthcare.gov.

If he does well, the White House has something even better in mind. 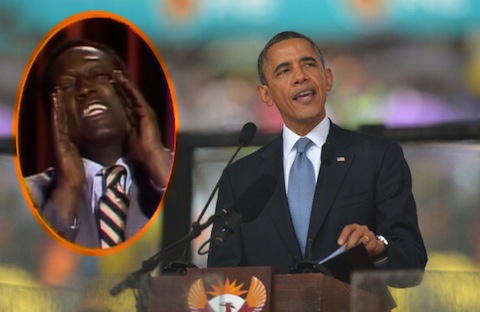