Years ago, when I was a waiter and bartender in Washington, I found that I had become a slave to few little routines. The bucket of ranch dressing had to go in the right, Russian in the middle, and vinaigrette on the left. The forks are here, the knives are there. Just coffee bags in the coffee bag drawer, please.

Listen, Mr. New Waiter who just showed up – that’s not where it goes!

I don’t know, because that’s where these things have always gone.

When I look at the divide on Ted Cruz’s filibuster, this is part of what I see going on. The Washington hands, even conservative ones, are upset in part because . . .

TED CRUZ IS PUTTING THE RANCH DRESSING ON THE LEFT!!

That’s now how you get things done around here, they’re snickering, sometimes is quite disparaging terms. You pass legislation. You have to win elections first! Last time there was a shutdown, it was a disaster for Republicans. 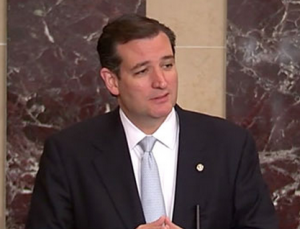 For me, ideology is not some theory that doesn’t apply practically. Ideology is what actually works in the real world. I’ve thought very hard about this particular tactic – linking government funding or a debt ceiling increase to Obamacare. And while I may be wrong – this one is very unpredictable – I think what the House conservatives and Ted Cruz are doing is something very practical that will work.

Cruz’s Republican critics, mainly centered in Washington, do not understand what’s going on here. This is not about defunding Obamacare this year. Ted Cruz knows that. It’s about making a point. It’s about building momentum. It’s about setting the stage. And it’s ultimately about elections and reversing Obamacare.

First of all, Cruz and his allies are creating a movement that conservatives can sink their teeth into. Sorry, but video of conservative pundits on Fox News pontificating about the ills of Obamacare are not going to stir the masses. This will.

But it’s not just about conservatives. The Washington thinkers believe moderates and independents will be turned off by the spectacle of the filibuster and a possible government shutdown. I get the point, but I think the reverse will happen.

As Obamacare goes into effect, its disastrous shortcomings will become clear to the public. Nancy Pelosi was right – once you pass it, you’ll really know what’s in it! And as this happens, because of the battle being waged today, Americans will have a very clear idea about who opposes Obamacare, and who is going to take action to reverse it.

Obama has the bully pulpit. Republicans have the filibuster and a government shutdown.

Americans are being put on alert that this is such a profound matter that Republicans are willing to shut down the government over it. The great government intrusion that is Obamacare threatens not just our health care, but our freedom. Cognizant of the danger, average Americans will be watching, and as their own anger grows, they’ll know that conservative Republicans have their back.

Make no mistake, Cruz and the Republicans are going to lose this battle. Obamacare will not be defunded. The government may shut down for a couple of days, debt payments may get delayed – but eventually, while they may get some important concessions, Republicans will have to fold. Obama will never abandon the law that bears his name.

But the point will have been made, and the crescendo toward appeal will begin. You can’t just sit on your ass and talk about elections. You have to drive elections. That’s what Ted Cruz and the House conservatives are doing.

I’m not nearly convinced Ted Cruz is the second coming of Ronald Reagan. Unlike Reagan, he’s only been on stage for a short time. I need to get to know him better. And a lot of what’s going on here sure is good for Ted Cruz, an ambitious young politician.

And I don’t like the way he and some who support him have been vilifying conservatives who disagree that this is the right way to go, casting this as a “test” of whether one is truly conservative. Some who believe strongly in conservatism think this will backfire. That’s a legitimate point of view that doesn’t make anyone less conservative or suggest that they wouldn’t have opposed the Nazis, as Cruz deplorably charged Tuesday.

But Cruz is clearly one of those people not willing to wait for proper protocols to present themselves before taking action. He’s willing to roll the dice and take bold action to reverse a situation that seems desperate, because turning Obamacare around will not be easy. He’s standing on principle. Even if it means switching the ranch and the vinaigrette.

Such people do make history.