President Obama is rolling out Bill Clinton once again to give him some desperately need public relations assistance, appearing with the former president late this afternoon in New York City to try to sell the unpopular Obamacare to Americans. 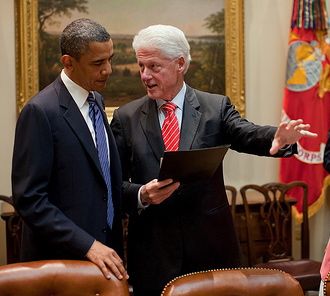 It’s the second time in recent weeks Clinton has been enlisted by Obama to promote Obamacare. Clinton has a talent that Obama lacks for explaining complicated matters in an appealing and folksy manner.

Obama’s most important use of Clinton came in the service of explaining another complicated matter – Obama himself. Clinton was the star of the 2012 Democratic Convention in Charlotte, North Carolina, offering up a rationale for Obama’s reelection that the president himself could never deliver and which analysts believe may have been instrumental in Obama’s victory.

Obama’s buddy routine with Clinton comes after years of repairing damage from the bitter 2008 Democratic primary campaign, during which Bill Clinton and Obama were strongly and personally at odds.

Bill’s service is hardly altruistic. Not only does he love being the center of attention, he may also want something from Obama in return for his PR work – an endorsement of Hillary, or at least a neutral stance in her expected primary fight with Vice President Joe Biden.