Once, when I was a White House reporter for a mainstream news organization, my editor ran a story on the front page. Mind you, we only put two stories on the front page, so it was a big deal.

That’s right, the editor ran the same story twice, in the same place. He deserved to be fired. It was only because the chief editor of the publication was a magnanimous guy that he wasn’t.

My point is, there there are some mistakes, in the jobs we hold, that you just can’t make. It almost doesn’t matter what else you have done. If you sailed the QE II around the world 20 times and then on the 21st you ram it into Gibraltar, you’re not going to be captaining the QE II again. You can go rent sailboats in the Bahamas. 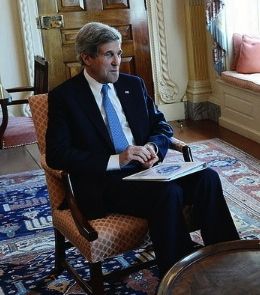 John Kerry’s error Monday in London was of the type that I cannot remember from a U.S. Secretary of State in my lifetime. With a few careless words – and careless is exactly the antithesis of what a diplomat must be – Kerry completely screwed up the president’s policy, a policy that is a matter of war and peace. President Obama should fire him.

By suggesting off the cuff in answer to a question at a news conference that Syria could escape a U.S. bombing by handing over its chemical weapons, Kerry derailed Congressional votes on the matter and provided Syria and its benefactor, Russia, with a means of preventing an attack, which they immediately seized.

Obama’s policy of using U.S. muscle to prevent the routine use of chemical weapons, which I think is a good idea, is now shred into tiny pieces. As Syria’s chemical attacks recede into memory, it will become impossible for Obama to revive his campaign to get either Congress or the world community to back an attack on Syria. What’s more, members of Congress who bravely took a position thinking there would be a vote are now left out to dangle in the political winds.

Worse, the credibility and stature of United States has suffered an incalculable blow. We, frankly, look like idiots. We’ve been vacillating and taking our time in our response to Syria, and now we’re not even going to do anything. We let the Russians and the Syrians steal our own policy out from under us, and they will use this to drag things out while the world reckons with the impossible logistics of discovering and destroying Syria’s chemical weapons while a civil war rages.

Meanwhile, enemies of ours like Iran and North Korea will get the distinct and possibly accurate impression that we aren’t serious about opposing their evil designs. Rivals like Russia and China will be emboldened to go about with the business of expanding their influence at our expense.

Perceptions of U.S. weakness or incompetence hold great danger. Part of the reason Nikita Khrushchev figured he could dispatch missiles to Cuba was that he took the measure of John F. Kennedy during a meeting in Vienna and decided he was dealing with a lightweight. The world almost ended.

Kerry’s mistake should be enough to get him cashiered, but it’s not even his only major league exercise of bad judgement during his short career at State. In the very same press conference Monday, he remarked that the strike on Syria would be “unbelievably small.” Even Obama had to rebuke him on this, saying the United States “doesn’t do pinpricks.”

Last week Kerry wouldn’t rule out putting U.S. boots on the ground in Syria, just before he did rule it out. The man is a walking gaffe time bomb who has to be stopped. The stakes are serious.

Meanwhile, Kerry has devoted significant time and effort to something nobody else is really focused on – a peace treaty between Israel and the Palestinians. This, even though though it’s relatively quiet between those two while the area around them is falling completely to pieces. The only urgent purpose of this initiative I can think is getting a Nobel Peace Prize for John Kerry.

But Kerry should no longer be in a position to seek the favor of the Norwegians. Rather, he should be renting windsurfing boards in the Bahamas.